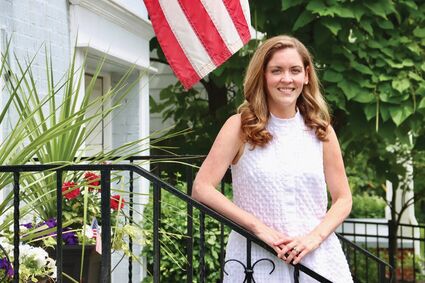 Hinsdale's Alison Kozlow is a busy working mom of two preschoolers. Activism was not on her to-do list.

But when seven people were gunned down and dozens more injured while watching the Highland Park Fourth of July parade earlier this month, she became a woman on a mission. Kozlow joined the March Fourth movement to galvanize public support and lobby Congress for stiffer gun control measures.

"What we're trying to do with the March Fourth movement is ban assault weapons federally," Kozlow said. "We want to make sure that all communities are protected."

It was while watching her village's own Independence Day parade that she learned the horrifying news. Another mass shooting, and one so close to home, had left her feeling despondent. She sought out others similarly disheartened.

"A friend of a friend had posted on Instagram that she wanted to see who else was as frustrated as she was," Kozlow related.

The frustrated poster was Kitty Brandtner of Winnetka, March Fourth's founder. Kozlow responded and was enlisted to help handle the start-up group's social media messaging the first couple of days as it gained traction. Response was strong, and two weeks ago more than 500 supporters, including Kozlow, traveled to Washington D.C., to speak with legislators and march at the Capitol to demonstrate their determination.

"I traveled to D.C. with four others from Hinsdale and Clarendon Hills, along with others from Hinsdale," said Kozlow, gratified to have representation beyond the North Shore. "We just started figuring out how can we use our voices to help enact change."

March Fourth members also reached out to families impacted by the school shooting in Uvalde, Texas, in May, helping furnish resources for individuals to join the rally.

"They weren't able to fly to D.C. without the help from donations from others," she said.

House Bill 1808, which calls for the prohibition of assault weapons, passed out of the body's Judiciary Committee last week but has not yet been taken up by the full House of Representatives.

"We were hoping to get a vote from the House this week, but it just hasn't been settled yet, so we really want to encourage folks to call their representatives," Kozlow said.

Kozlow and husband, Jimmy, moved to Hinsdale in February 2020 just before the pandemic hit. That complicated their introduction to town, but they've since fallen in love with it.

"It offers everything you want from the city but in a scaled-down fashion," she said.

Kozlow credits her mom for encouraging her to fight for what's important. It's been rewarding for her to turn that counsel into action.

"What I've realized in the past three weeks is that your voice matters, and that by just getting up and fighting for something you believe in and getting an army behind you, things can change," she said.

That Instagram page that started with just a couple hundred followers now has more than 18,000 from across the nation. Kozlow plans to keep fighting.

"Assault weapons do not belong in the hands of civilians, period," she asserted, "so we don't have to be scared to send our kids to school or watch a parade with our families."