Gymnast basks in an Olympic glow 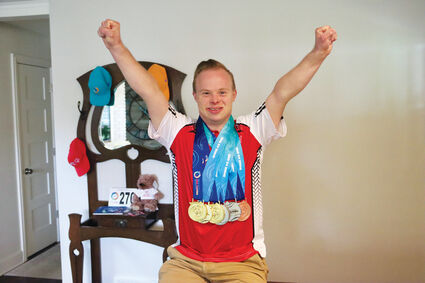 Danny, 32, has quite a collection of hardware at his family's Hinsdale home, earned over more than two decades of pursuing gymnastics. His talent in the sport has taken him around the country and even to Italy to compete. (Jim Slonoff photo)

Competing against the nation's best at the 2022 Special Olympic USA Games June 5-12 in Orlando, Fla., Danny Baker, to borrow a phrase, stuck the landing.

The Hinsdale native brought home four gold medals, one silver and two bronzes in his debut at the quadrennial event representing Team Illinois.

"You know what makes me happy? Gold!," asserted Danny, speaking at his home earlier this month.

Danny, 32, was selected to be part of the state's 67-member contingent for the Games.

Seeing the track and flag football athletes enduring the sweltering outdoor temperatures made Danny thankful that his was an inside endeavor.

"It was hot there," he remarked.

The gymnastics competition heated up, too, with Danny capturing the top prize in rings, vault and floor exercise. He earned bronze in the all-around. Asked which disciplines are his strongest, he's quick to answer.

Ironically, the rings were more of a fear factor than a favorite when Danny took up the sport 24 years ago at age 8, according to his mom Vicki.

"Do you remember how afraid you were to get on them?" she asked her son. "He didn't like them," she related.

"Self-appointed!" his dad, Dan, interjected with a laugh.

Danny has developed under the tutelage of Elite Stars coach Patty Hermann, and he has traveled with Elite Stars to competitions in California, Texas and Georgia. He also went to Italy in 2015 as part of a global Downs Syndrome competition.

"He's really gotten around," Vicki said. "He's gotten us around, too."

This year's USA Games was the biggest in its 16-year history, assembling more than 5,500 athletes and coaches from all 50 states and the Caribbean.

United Airlines gave them a celebratory send-off at O'Hare Airport, and plenty of media was on hand at the ESPN Wide World of Sports Complex host site, including Good Morning America. Danny doesn't mind the spotlight.

He returned only to head out again a few days later to the Illinois Special Olympics Games at Illinois State University in Normal.

"They did fireworks there," Danny said, recalling the opening ceremony.

And he collected more medals, including gold in the all-around.

His run of success actually began back in April when his Illinois cheerleading team - yes, he does cheerleading, too - won gold at the ICU World Cheerleading Championships in Orlando as a member of the U.S. National team.

"Gymnastics has been great for his physical strength," Dan said.

Danny also plays Special Olympics basketball through the Hanson Center in Burr Ridge, which he enjoys for the team fellowship. He currently lives in Westmont with three housemates.

Danny's shiny trove of gymnastics hardware hangs proudly in the Baker family's living room. He also displays the menagerie of pins he traded for with counterparts from around the country and treasures the new friendships he made. 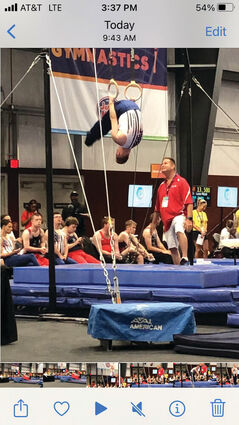 Danny Baker executes a maneuver on the rings during the Special Olympics USA Games last month in Orlando. Danny won gold on the apparatus, one of four golds and seven medals he brought home from his first ever USA Games. (photo provided)

As one of the elder statesmen at his gym, he's relishes being a role model for the younger athletes.

Danny takes a bit of break in the summer, with the exception of a weeklong gymnastics camp, before the competitive season starts up again in September. So how does he like to relax this time of year?

He tries to lay off the junk food and fattening drinks to maintain his fitness. And he works with a fitness coach at Oak Brook Park District to keep in shape.

He's progressed so much, said his parents, that he's on the verge of advancing to Level 3, which involves learning more challenging skills.

"He pretty much trains year round," Dan noted.

Asked if he loves gymnastics, a smile spreads across his face