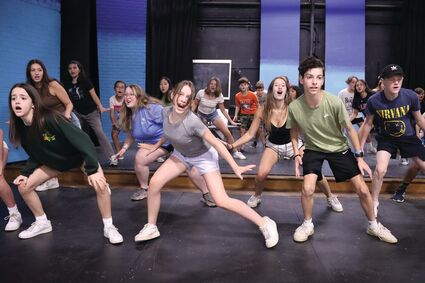 Four short weeks of long rehearsals will culminate Friday, July 29, as the 45 members of the Stage Door Fine Arts cast present "High School Musical 2 " at The Community House. The musical is based off a Disney film of the same name. (Jim Slonoff photos)

"I'm a little sad, because it's Libby's last show," said McArdle, who plays the show's antagonist, Sharpay. She and Larson have shared the stage since they appeared as ensemble members in "Peter Pan" in 2014.

Both Larson and McArdle said they were excited to hear that one of their favorite movies from childhood had been chosen as this summer's Stage Door show. It gives McArdle the chance to sing her favorite song from the show, "Fabulous," while Larson showcases her talent in "Gotta Go My Own Way."

Like so many children of the 2000s, Larson enjoyed all three "High School Musical" movies and thought she knew them by heart. But as she prepared to play the show's lead character, Gabriella, she realized she had much more to learn.

"The actual vocals of it are pretty tough," she said. But Larson said she likes a challenge.

Even he didn't expect such intricate harmonies when choosing "High School Musical 2" as this summer's show. But Smith said his cast of 45 have worked hard and are ready to present an impressive production.

"It's just really great music," he said, set to an "over-the-top" story told by colorful characters.

The stage rendition of the 2007 Disney movie takes place on the last day of the characters' junior year of high school. The main characters all get jobs at the local country club, where the story, romance and drama unfold. Sharpay schemes to steal heartthrob Troy (played by Nathan Frewen) from Gabriella.

Taking a movie from screen to stage poses challenges that go beyond music, Smith said. Rather than construct sets for the many different locations included in the show, Stage Door has employed video to help set the scene for places like the country club, pool, beach, golf course and pro lounge.

The road to opening night began just a month ago. Following auditions on June 27, the cast began rehearsing for several hours every weekday in preparation for opening night on July 29.

Several roles, including Gabriella and Sharpay, are double cast. That means that in addition to their lead roles, Larson and McArdle had to learn music, dancing and blocking as part of the show's ensemble. It's a lot to learn in just four weeks, and it's an experience that Larson and McArdle agree teaches them much more than how to sing, dance and act on stage.

McArdle said she's learned how to work in a group, how to take direction and how to manage multiple things at once. Whether she pursues theater beyond high school or not, McArdle said Stage Door has prepared her for her future. 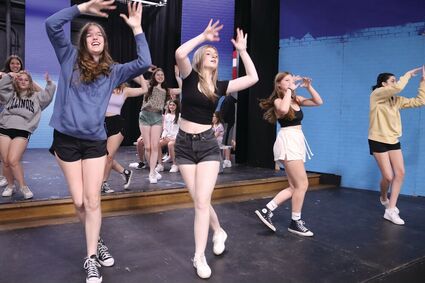 Larson said it's been fun reliving a bit of her childhood as she prepares to leave for college. And while her immediate plans don't include theater, she said her years at Stage Door have given her the confidence and assertiveness she needs to tackle her next challenges. That's the goal of Stage Door, Smith said. Its mission is to teach children the tools of performance while also teaching them tools for life.

"There's a very educational side to it," he said.

And of course, the theater always aims to present a great show for its audience.

"High School Musical 2" will be performed at The Community House in Hinsdale Friday to Sunday, July 31. Turn to Page 22 for details.