Niche sport has presence in Hinsdale 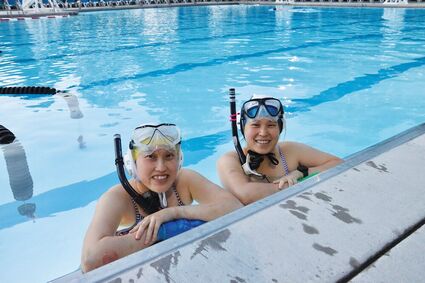 Sisters Vania Leung of Hinsdale and Ariel Leung of La Grange take a break from the action during practice with the Chicago Underwater Hockey Club.

When sisters Ariel and Vania Leung head to the pool, it's rarely for a leisurely soak. As members of the Underwater Hockey Club of Chicago, a trip to the pool means they are prepared for a workout.

"It's a very niche sport," said Ariel, a native of Hinsdale who recently settled in La Grange. She learned of the sport from her sister and brother-in-law, Hinsdale resident Brian Lin. Lin is a former member of the University of Illinois club and a current member of the Chicago team.

Underwater hockey has thousands of enthusiasts making up teams and clubs across the country and is played throughout the world. Known as octopush in areas like the United Kingdom, underwater hockey employs two teams that maneuver a puck across the bottom of a swimming pool toward goals on opposite ends. Wearing fins, masks and snorkels, players use short sticks to help their team move the puck into their respective goals.

The team known as the Chicago Shorgis practices twice a week and competes across the country. Travel is optional, with some members choosing to stay close to home.

Vania said she and her husband have met people from all over the country and the world through their participation in underwater hockey. The sport has also introduced them to a variety of people closer to home.

Members of the Hinsdale club include men and women ages 21 to 83 from throughout the Chicago area.

"It's a sport that can be played by anyone," Vania said.

Ariel began playing underwater hockey about four years ago. Looking back, she said her first practice was rough. But she's since gained skill, strength and perhaps most importantly, breath control. Underwater hockey requires players to hold their breath while under water.

While previous swimming or snorkeling experience can help, it's not a prerequisite for the sport, Ariel said.

"By the third practice, that's when you start to get the hang of it," she said.

Ariel said the water is an equalizer when it comes to weight and size, allowing people of different ages, sizes and fitness levels to play together. While she's not the fastest or the strongest member of the team, Ariel said her strength is her experience, both in the water and in the sport.

A former member of the Hinsdale Swim Club, Ariel ran track and field at Hinsdale Central High School and now runs marathons. She said underwater hockey has helped to increase her stamina.

"I've definitely noticed when I work out, it's not as hard as it used to be," Ariel said.

Vania said she had never heard of underwater hockey before meeting her husband.

"It's a very strategic sport," she said, and one that requires players to work together. As a swimmer and triathlete, Vania said she enjoys the teamwork underwater hockey requires. 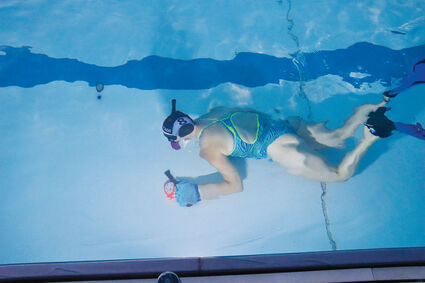 Cheryl Russell, a member of the Chicago Shorgis underwater hockey team, maneuvers the puck toward the goal.

Practices take place twice a week and are typically held either at Hinsdale's outdoor pool or at the Water's Edge Aquatic Center in Bensenville. All practices are open to anyone who wants to give the sport a try.

A new member clinic is scheduled for Sunday, Aug. 21, with the time and location yet to be decided. New players who are interested in attending can find more information on the team website at https://www.chicagounderwaterhockey.us or by emailing Ariel at [email protected]