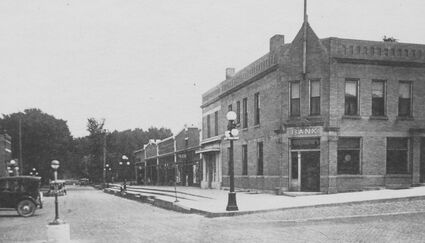 Early First Street - This photo in Sandy Williams' book, "Images of America - Hinsdale," shows the southeast corner of First and Washington streets. "In this early 1920s photograph, First Street development appears fairly complete. The bank's vault annex is shown as well as the four-store retail block built in 1912. Included here is Hinsdale's first movie theater, boasting a seating capacity of 300. To appease concerns over new 'moving picture exhibitions,' residents were notified that 'no picture will be shown until approved by a committee of Hinsdale citizens who will rigidly maintain strict censorship.' "