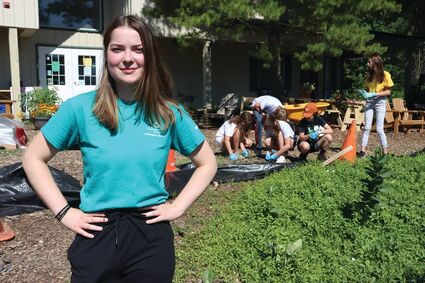 Alexandra Knoch, a former participant in Volunteer Camp at The Community House, now leads the group as camp counselor. Campers Tuesday were busy sprucing up the Hanson Center in Burr Ridge, with this group pulling weeds.

Just a few short years ago, Alexandra Knoch of Hinsdale was a camper at The Community House's summer volunteer camp. Now a junior at Hinsdale Central High School, Knoch returned this summer as a camp counselor.

Volunteer camp is a chance for kids entering sixth through ninth grades to learn about volunteering and the organizations in their community that rely on the help of volunteers.

"It's different as a high schooler looking back," Knoch said, and yet, it's also very much the same. During her four weeks as a counselor, Knoch has visited some of the same places she went as a camper. But rather than removing brush at Oldfield Oaks or cleaning up the goat barn at Hanson Center, Knoch is there to supervise and encourage this year's campers.

The Community House offers four four-day sessions of volunteer camp, all of which are supervised by Knoch, recreation and athletics supervisor Kelci Bednar, and intern Kenton Guerig.

Each session runs from Monday to Thursday and includes a visit to Willowbrook Corner, Hanson Center, and two other nearby destinations in need of a few helping hands. Knoch said each day begins with the campers' arrival at The Community House at about 9 a.m. Knoch leads the campers in games and ice breakers to help them get acquainted in the half hour before they depart to the day's destination.

At Willowbrook Corner, where children in first through eighth grades are cared for during the summer, campers participate in whatever is planned for the day. Sometimes they play games or accompany the children on walks, Bednar said.

The work at Hanson Center, which is home to many animals, varies depending on what needs to be done.

Some campers use their camp hours to fulfill requirements for service hours, but Volunteer Camp also teaches campers about the needs and resources of their community, Knoch said, and how they can help. Most visits include a tour and information about the organization and its work in the community, followed by about two hours of hands-on work.

Campers return to The Community House at noon, leaving them and Knoch with an afternoon to spend however they please.

"That's one of my favorite things about it," said Knoch, who enjoys the balance between work and relaxation that her summer job offers.

Since attending camp herself, Knoch said she has come to realize the importance of giving her time. She's now a member of the Habitat for Humanity organization at Hinsdale Central High School, as well as Family Career and Consumer Leaders of America, which teaches kids skills such as cooking, baking and sewing. The group also prepared food for a homeless shelter. 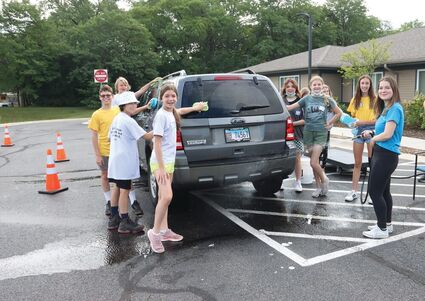 On Wednesday, Knoch led the group as it assisted with Harvester Place's annual summer car wash to raise money for the Alzheimer's Foundation. (Jim Slonoff photos)

Knoch said Willowbrook Corner is a favorite of nearly every camper, but she remembers Mayslake in Oak Brook as one her best camp experiences. She pulled weeds outside and sorted through donated books in the historic building.

Even as a counselor, Volunteer Camp held some new experiences for Knoch, who had never visited Harvester Place assisted living in Burr Ridge before this summer's camp.

Bednar said a main purpose of Volunteer Camp is to teach young people that they can have fun while doing something to help their community. Knoch said she learned that lesson as a camper and is learning it all over again as a counselor.