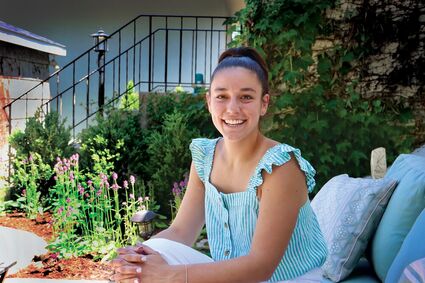 Hinsdale's Stephanie Dolehide recently graduated from the United States Military Academy in West Point, where she helped lead the Black Knights women's tennis program to two Patriot League championships while also serving in several leadership roles on campus. Beating both Navy and Boston University as an underdog at this year's Patriot League tournament left lasting memories. "Every match could have been our last," she said. "I think we all lost our voices each match." (Jim Slonoff photo)

Stephanie Dolehide was on a mission.

The 2018 Hinsdale Central graduate, a state tennis champion with the Red Devils and key player for Army's Black Knights, was determined to conquer the U.S. Military Academy's indoor obstacle course that had been a driving factor in her post-secondary selection.

The IOCT was the culmination of the Military Movement class focusing on tumbling, strength and balance.

"I started taking (Military Movement) my plebe year - my first year - and I was failing it for almost the entirety of the time I was taking it," Dolehide said. "I realized that maybe I wasn't in the best shape."

On the tennis court, however, her fitness seemed optimal as she helped lead the program to a Patriot League championship and was named rookie of the year. Quite a debut considering the USMA wasn't even on Dolehide's radar until a chance meeting with Army head coach Paul Peck in high school.

"I really wanted to go to some Big 10 school, take that approach," she said. "He showed me a video of the indoor obstacle course. I remember thinking it was just the coolest thing."

But the IOCT remained unconquered, meaning she would have to train on her own to overcome it.

"I worked on that for a while. I got into some better shape," Dolehide said. "It really taught me to ask for a lot of help, and it was amazing to see how many people wanted to help."

By her junior year, all that hard work finally paid off.

"I ended up doing well on it so I didn't have to take it my senior year," shes said.

She continued to show mastery with her racket, earning team MVP honors as a sophomore for her prowess in both singles and doubles. Dolehide's comrades voted her team captain her junior and senior years. She drew motivation from the family spirit within the squad.

"We called ourselves 'WAT' - women's Army tennis - so that community was really special," Dolehide said.

It was testament to the leadership qualities that she applied off the court, as well, like in co-founding the campus Empowered Women Empower All group and in serving as Brigade Student Athlete Advisory Committee Officer her senior year.

"I oversaw the captains of the Division I teams and I got to work with all the different teams at West Point and all the different cadet-athletes," Dolehide said. "We were able to encourage a lot of community outreach events throughout the teams, like hosting cadets to learn how to play tennis and what it's like to be a cadet-athlete.

"We did a lot of kids days where we would have kids from the West Point community and outside the community come to different sporting events," she continued.

"I'm very thankful for my coaches and the people that helped me," she said of the recognition.

She credited her high school experience for equipping her with both the academic and the time management skills necessary to successfully balance school and athletics. And she relishes trips back to Hinsdale to reconnect with a friend group that traces back to Oak School.

Dolehide closed her West Point tennis career as it began - with a league championship and a berth in the NCAA tournament.

"I'm excited to go back and watch them play," she said.

At May's graduation ceremony, cadet Dolehide became 2nd Lt. Dolehide and also gained entry to another distinguished group: recipients of the Army Athlete Association Award that, as described by the USMA, goes to a "female athlete who displayed the most valuable service to intercollegiate athletics during a career as a cadet."

She'll go to Virginia for logistics training before heading to her assignment in Germany early next year as a quartermaster supporting a field artillery brigade.

"It's crazy to think that I'm closing this chapter of my life, but there's a lot that I'm going to take into the next chapter."

Last week, Dolehide was able to do something she'd never done - play doubles in a pro tournament with older sister Caroline. The pair made it to the quarterfinals of the Charleston, S.C., event, but the outcome was secondary to the sisterly fellowship.

Looking back over the past four years, Dolehide appreciates the way her character has been forged through adversity.

"There were some tough times but it was a really good experience, and I learned from all the trials that I had," she said. "There were more beautiful times than there were not. I met some people that I'll never forget."