Sister's spirit, desire to empower others, lives on 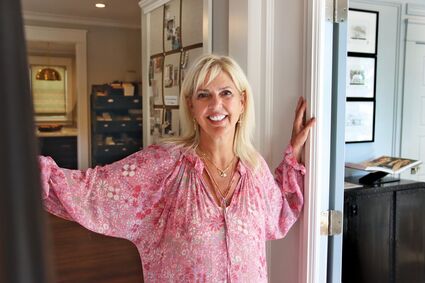 Julie Jordan Laux said her younger sister, Jodi Allen, was good at just about everything she did. Even after her death from pancreatic cancer, Laux said her sister is still making her mark.

While battling cancer, Jodi wrote a prayer for the board of directors of Xavier University, Cincinnati, on which she served. While in hospice care, a music therapist turned those words into a song, which was submitted to a contest and won.

The message of the song, Laux said, is that asking for help isn't a weakness, but a chance to empower others to do good. Despite her absence, Jodi is doing just that for her sister, who will serve as honorary chairperson at the Goombay Bash, a fundraiser for cancer research to be held July 23 at Navy Pier.

This is the first live Goombay Bash since 2019, which experienced a hiatus due to COVID in 2020 and 2021. Throughout its history, the Caribbean-themed event has raised more than $10 million for cancer research, all of which was donated to Robert H. Lurie Comprehensive Cancer Center of Northwestern University and used as seed money to leverage more than $153 million in research funding.

Part of Laux's job as honorary chair is to help fill the grand ballroom of Navy Pier with supporters for the 20th annual event.

"I'm generating a lot of enthusiasm in my community," she said, and introducing a new group of people to Goombay and the work of its host, the H Foundation.

Laux said her family, friends and colleagues will fill several tables at the event.

"I'm very humbled by the whole process," said Laux, and overwhelmed by the response of those she has approached for support. Asking for support, even for such a deserving cause, is uncomfortable, Laux said. But as her sister's song reminds her, a request for help is an opportunity for someone to do good.

Laux will be featured in a video to be shown at the event and will also speak to the crowd about her sister, how cancer has impacted her and her family and the importance of Goombay Bash.

"Sadly, for everyone, cancer is personal," Laux said, and she is no exception.

Laux and her four sisters grew up in Ohio. She studied accounting at Miami University and worked as a certified public accountant before turning her love of home design into her own business more than 16 years ago. As founder and owner of J. Jordan Homes of Hinsdale, Laux helps people turn visions of their dream home into reality.

Through J. Jordan Homes, Laux supports local efforts as much as she can.

"I'm a big believer in local," said Laux, who also supports those touched by cancer as a member of the Wellness House Ball board.

Laux said she will be remembering her sister and drawing from her "can do" attitude as she steps to the podium on July 23.

"I know she'll be right there with me, helping me do the best I can," she said.