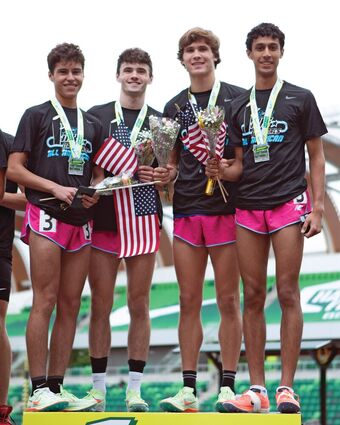 Michael Skora, Dan Watcke, Colby Revord and Aden Bandukwala captured first place in the 4x800 relay in the Nike Outdoor Nationals earlier this month, breaking the school and state record in the process with a time of 7:32.14.s

The Hinsdale Central High School 4x800 relay team finished the 2022 Illinois High School Track and Field finals with a second-place finish and the desire to keep on running.

On the way home from that meet at Eastern Illinois University, coach Noah Lawrence suggested the foursome make a trip to Eugene, Ore., for the Nike Outdoor Nationals, the unofficial national high school championships held at Hayward Field on the University of Oregon campus. Just a couple of weeks later, Red Devils Colby Revord, Aden Bandukwala, Michael Skora and Daniel Watcke made the trip as the Dale Track Club - a name long ago adopted for Hinsdale Central track competitions that take place outside of the regular high school season. They made the most of the chance to compete.

In fact, the team won the 4x800 relay event, unseating the two-time medal holder and running the seventh-fasted time in U.S. high school history at 7:32.14. The finish set a new record for the Hinsdale Central program as well as the state of Illinois.

Lawrence called the trip "a leap of faith" that paid off not only for the runners, but for the entire Hinsdale Central community.

"They are both incredibly talented and incredibly hardworking and coachable," Lawrence said of the foursome.

While all four are seasoned members of the Central relay team, these particular runners never completed in this event together until Oregon. Teammates Grant Miller and Kyle Doorhy ran the event throughout the season, but to give the team the best chance of success, the four with the fastest recorded runs made the trip.

"We put our fastest lineup for Nike Nationals," said Revord, who ran the relay's first leg, followed by Bandukwala, Skora and Watcke as the anchor.

"We thought we could win," Watcke said of the team's confidence upon entering the race.

It wasn't until after the team had secured its first-place medal that they realized they had also prevented the second-place team from accomplishing the meet's first three-peat in a relay event. With less than a second between the Dale Track Club and the reigning Valley Project team of New Jersey, the finish was the second-closest in meet history, according to officials of the Nike Outdoor Nationals.

It was a long way to go for an event that lasted just over seven and a half minutes, but all four members of the team agreed it was well worth the effort to show themselves, and the rest of the country, what they could do.

The foursome, accompanied by Watcke's mom and Skora's dad, arrived on the Wednesday prior to their Saturday race. While taking time for some last-minute training, they also found time to roast some marshmallows and create some lifelong memories. 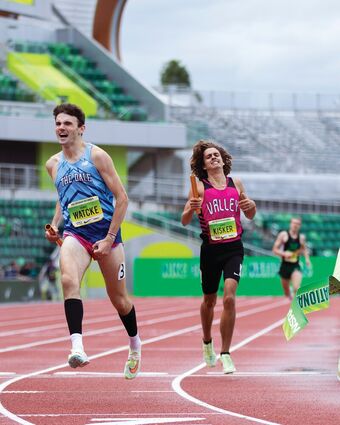 "We wanted to do well, but it also was just a fun experience," Skora said.

Competing in Hayward Stadium was an experience in itself, the runners agreed. Achieving a win made the experience

Revord and the rest of the team said they have coach Lawrence to thank, not only for coaching them to the win, but for suggesting they make the trip to Oregon.

"He said we should make the most of the opportunity," Bandukwala said.

They also thanked coaches John Smee, Jim Kupres and Jim Westphal, their parents and their teammates for preparing them and supporting them through the experience.

"It's an opp we're never going to get again," Bandukwala said. But Skora isn't so sure.

"We'll see what next year brings," said Skora, who along with Bandukwala and Watcke has another year on the Central team - and another chance to make history on the high school track.