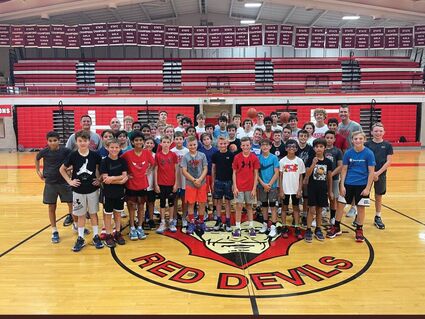 Kids got a chance to learn from the pros - at least when it comes to playing Red Devil basketball - during a weeklong summer camp led by varsity Hinsdale Central players. Many of the student coaches were once enrolled in the camp themselves. (photo courtesy of Karen Eck)

Long before he ever donned a Red Devils basketball uniform, Evan Phillips learned the basics of the game from members of the Hinsdale Central basketball team.

"I remember it being super special and cool to be coached by the varsity players," said Phillips, who was in elementary school when he attended his first Hinsdale Central summer basketball camp.

Now an incoming senior and a member of the varsity team himself, it's Phillips who is sharing his knowledge and skills with tomorrow's high school players. He and several other members of the Central team assisted Central varsity head coach Nick Latorre in this summer's abbreviated basketball camp for boys in elementary and middle school.

The annual camp typically takes place Monday through Thursday for two weeks, but due to construction at the Hinsdale Central fieldhouse, this year's camp took place over five days in a single week in June.

Latorre said the camp roster was abbreviated, too. About 50 players attended, rather than the usual 200. But he maintained his roster of student coaches, resulting in plenty of one-on-one attention for this year's campers.

Like Phillips, Chase Collignon attended the Hinsdale Central camp as a young player and welcomed the chance to come as part of this summer's coaching staff.

"It's fun to hear them call me 'Coach,' " Collignon said.

Players at this year's camp were divided into groups according to age and each day made their way through several skill-building stations. Each group learned shooting skills, defensive skills, rebounding and ball handling, but they also learned skills that can be used outside of the gym, Phillips said.

Student coach Emerson Eck said the best part of the week was Friday, when he and the other coaches watched the players use their newly developed skills in competition.

The young players weren't the only ones learning at basketball camp. Collignon, who hadn't spent much time with children before this summer's camp, said he learned patience while teaching kids to dribble, pass and shoot.

"I learned how to run a practice and what it takes to be a coach," Collignon said.

Phillips said the young players he coached at camp this summer were hungry to learn, which made them fun to teach.

As a camper himself, Collignon said he learned the basics of the game, but also how to be a competitor and a part of a team.

"It's about being part of something bigger than yourself," Latorre agreed.

Latorre has coached the Central team for 13 seasons and has led youth summer camps for even longer.

"I attended high school camps as a kid. They're just part of our culture," Latorre said.

He said summer basketball camp introduces kids to the game, to the high school program, and even to teammates with whom they will play for years to come. Many members of today's Central team met as kids at Latorre's camp.

"I try to make it a combination of skill development and fun," Latorre said.

He wants the experience to be fun for his student coaches, too. Along with 10 current Central players, a handful of alumni turned out to help at this year's camp. By holding the camp early in the summer, Latorre's coaching staff is free to enjoy the rest of their break as they please. Collignon said he'll spend the rest of his summer as part of a traveling basketball team. Phillips, meanwhile, will spend the weeks between basketball camp and the start of the new school year working in the bag room at Ruth Lake Country Club.

"I'll clean carts, get bags situated, clean up the range," he said.

Eck and a few other basketball players from Central are organizing their own summer youth camp. Set for mid-July, Eck said the camp will teach kids the basics of a handful of sports.

Phillips, Collignon, Eck and the rest of the 2022-23 Red Devil team will reconvene on the court this fall as they prepare for a Thanksgiving tournament in Naperville North and Oswego, followed by their season home opener Saturday, Dec. 3, against Hinsdale South High School. On the court, they'll rely on the relationships they started building years ago at summer camp.

"The best teams are made to have the best chemistry," Phillips said.