No one injured in two-car crash 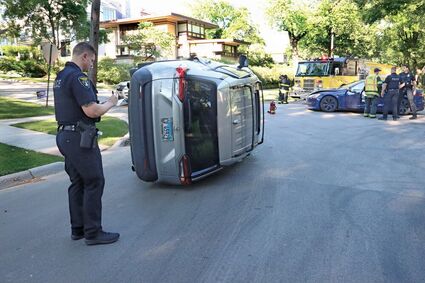 This Toyota RAV4 ended up on its side after a two-car collision at Grant and Maple streets the evening of June 23. The car rolled clockwise and rotated counter-clockwise, coming to rest on the passenger side facing east, according to police reports. The driver and his daughter, a passenger in the vehicle, refused treatment. The other driver told police he was headed northbound on Grant and stopped at Maple, which does not have a stop sign. After not seeing any other vehicles, he proceeded into the intersection and made contact with the RAV4. That driver also refused treatment and was cited for failure to yield at an intersection. (Jim Slonoff photo)