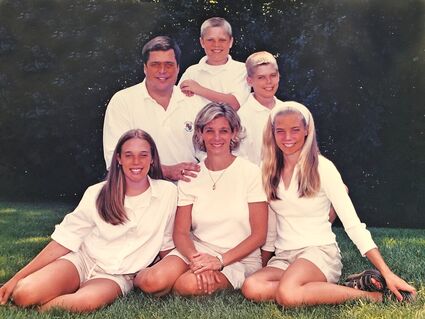 This portrait of the Smego family dates from the early 2000s, a couple of years before Mark suffered a severe stroke. Family always was important to Mark, his wife Peggy said, and he loved spending time with their four children, Maggie (clockwise from bottom left), Matthew, Michael and Molly. "We were each other's best friends," Peggy said of her late husband. (photo provided)

Peggy Smego lived two lives with her husband, Mark - the one before his 2004 stroke and the one after. And yet both were characterized by Mark's love of family, zest for life and unshakable faith.

The two met when Peggy, 23 at the time, was being set up with her roommate's male friend, who brought Mark along to make it a foursome.

"It was a blind date gone awry," Peggy said. "It was a funny start. There was like a glow around Mark when I met him."

The two were engaged six months later and married nine months after that. They enjoyed 35 years of marriage before Mark passed away Jan. 4 at age 61.

After their wedding, the two quickly started a family, having four kids in five years. Mark was undaunted.

"He loved being a dad, He loved babies. He could make them laugh when they were newborns," she said.

Mark enjoyed spending time with his kids as they grew older, too, handling bath time and bedtime and guiding them through all of their firsts, from trick-or-treating to building a snowman to learning to ride a two-wheeler.

The family lived in Indiana before Mark's work with his family's business brought them to Hinsdale in 1996.

"He was loving life. He just loved life," Peggy said. "There was nothing about Mark that made him more suspect to be having a stroke."

But he did suffer a devastating stroke in 2004.

"What was amazing was that he survived," Peggy said. "The infarction caused so much brain tissue damage that it was a miracle he survived it."

The obstruction was on the left side of his brain, leaving him paralyzed on his right side. Fortunately Mark was a lefty, which meant he could continue to read, write and speak.

Mark did see improvements to his physical and cognitive abilities, but after three years, his doctor said he would be safer living in an assisted living facility. Peggy kept him home two more years before he moved into The Birches at age 49.

He lived there for five years, then transitioned to Oak Trace Nursing Home for higher-level care. This past Dec. 31, he fell into a coma and passed away in the middle of the night five days later.

"He died the way he lived," Peggy said. "He died looking and being so peaceful. It was almost like, it literally looked like he was sleeping. We are so grateful for that."

Falling seriously ill or suffering a brain injury reveals who a person really is, Peggy said.

"The core of him included his faith in God and his belief that God was with him every second of the day," she said. "Would he get disappointed and sad? Yeah, but I think the beauty of what was going on with him and his God was God protected him from really understanding everything he was missing."

That faith has made an impression on his children.

"His continued Catholic faith and positive attitude will always remain an inspiration to me," his son Michael said. "He always said he was going to beat his sickness. And he did - through humor, family, love and faith."

Mark, who at one point said he wanted his headstone to read "Smeegs: Greatest Cubs fan ever," continued to love the North Siders throughout his life, Peggy said.

"Baseball was a perfect sport for him because it was slow enough that he could figure it out," his wife said. "He had a Rizzo poster - like a life-sized poster - in his room. He had a Rizzo jersey. He and Bryant were his favorite guys. He was a Cubs fan his whole life and he used to love taking the kids to games when they were little."

Mark, a graduate of Benet Academy who went on to play football at St. Ambrose College in Davenport, Iowa, inherited his love of the Hawkeyes from his dad, a University of Iowa alumnus. The family often took road trips to watch the football team play.

"It was just a fun team to follow. We went all the time with the kids," Peggy said.

Molly Gaudette said her dad had quite a competitive streak.

"He loved coaching baseball and talking about scouting other teams - even at 10-year-old Little League," she said. "He loved flexing his 'dad muscles' and beating his kids at board games, and he loved having the biggest cannonballs at the pool."

That fighting spirit continued through the end.

Mark had an infectious laugh and a knack for connecting people that served him well in sales and in his personal life.

"He was always the life of the party and was such a life inspiration to so many people," his son Matt said. "Due to his impairment and illness, he emphasized the importance of living each day like it's our last, and that's exactly what he did."

The impact Mark had on others was evident after his stroke and after his passing, Peggy said, noting the amazing support she and her children received.

"There are just so many angels in this town, in our circle," she said. "The generosity was unbelievable.

"All along I didn't know how to even begin to thank (everyone)," she said.

The pews were filled at his funeral Mass at St. Isaac Jogues Church and 800 people watched it livestreamed, she said.

"There was more money donated in his name to Benet than ever has been done upon a death," she said.

Maggie said her father was the kind of man who made everyone who walked into a room feel special.

"My father loved scratch-off lottery tickets, little chocolates to share and watching the Cubs," she said. "He was a simple guy who had his whole world altered in 2004 but never ceased to keep up his fight to get stronger.