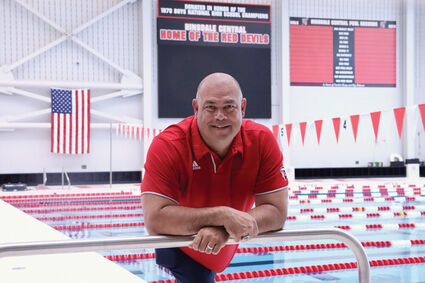 The first year Bob Barber was head coach of the boys swim and dive team, Hinsdale Central won its first state title in 26 years. This past year, he led the boys and girls swim teams to second-place finishes. And he was named the Illinois Swimming and Diving Association best coach of the year for boys and girls.

Talk to him about his many accolades, though, and he's quick to credit others.

"My accomplishments are through the work of these kids," said Barber, who was a student at Central from 1988-92. "I have acquired a skill in the past 20 years to navigate a full season with my athletes that allows them to see the light at the end of the tunnel, get through some of the hard days and still see the value in doing all of this work. I'm fortunate enough to share it with these guys, and they are willing to take the ride."

But coaching is more difficult and more nuanced than Barber suggests.

"Bob Barber works so hard at making sure his athletes are prepared each season," athletic director Dan Jones said. "He is meticulous in his practice preparation for all his swimmers and divers in his program. He works to make sure they all have the opportunity to succeed in their sport. He also wants to make sure they enjoy their time and are part of the swim team and experience."

The many coaches he has encountered as a swimmer and fellow coach have contributed to his success, Barber said. Schweer played a major role in his high school experience outside of the water, he said, pushing him to be the best he could be. And he appreciates the time he spent as an assistant coach under Corky King before becoming the boys varsity head coach in 2014.

"I had the fortune to work under Corky for 16 years before taking over," Barber said. "We kind of developed our own vision of what the program needed. He was very generous in relinquishing coaching responsibilities to me. ... He taught me, I would say, the majority of my skills."

Being able to connect with students is one of those skills. Barber said he works hard as a teacher to motivate his students, but math isn't a subject that inspires teens to open up. He has a different experience after the bell rings.

"I get to see the students turn into an athlete at the end of the day, and you don't even have to ask - they're just going to tell you how their day is going, what's going on, the best part of their day, the worst part of their day," he said. "And you get a steel trap and you remember that, so when you get a moment where they're at their highs or their lows, you remind them of the other time."

Back to the beginning

Barber started swimming when he was 6 and living in Raleigh, N.C. Early on, he was interested primarily in getting some exercise.

"I have four older brothers that were college athletes that in the spring came back frustrated with how they got out of shape for soccer and insisted I do a winter sport so I wasn't in the same position as them," he said. "The Barber household passion is soccer."

Barber, who moved to Oak Brook when he was 9, played soccer and swam all four years at Central. He matriculated to Miami University in Ohio to swim, but lasted only a few weeks in the program.

"I probably had my fill by that time," he said. "It's a big regret of mine. Considering what I do for a living, I wish I had those four years of experience to provide more intel to my athletes. I also think that's part of my motivation to make sure they get the most out of this sport that they want."

The past five years have held some real challenges for Barber and the program, with the diving ban instituted in 2017, the potential for the program to be cut in 2019, the onset of the pandemic in March of 2020 and the loss of standout swimmer Kendall Pickering in a car accident the following December.

"We've all matured or aged quite a bit," Barber said. "The program stays strong and it's a place where people can come back to when they need someone to lean on or something to lean on."

"As a coach, I want to make sure these guys have the best opportunity they can have," he continued. "As a parent, I want my daughters to have an experience that mirrors the ones kids prior to them had. These past five years have been a challenge to create that."

The past decade also has had some real high points as well. The year Barber led the boys to a state title, six other Red Devil athletic teams won state championships as well, breaking the state record St. Charles had held since 1999.

"How cool was that? That was a mythical year," Barber said. "I look back at that in awe."

The opening of the new Don Watson Aquatic Center for the 2021-22 school year also has been a high point. The improvements in air quality and lighting alone have made a huge difference, he said.

"Both have provided such an uplifting vibe to training," he said. "We're going to try for the first time in program history to put our entire swim team together (75 teens) for practice in the fall, which will have its challenges, but that's what this facility is allowing us to do."

Barber still has plenty of things on his coaching bucket list. He'd like to see more pictures up on the wall of the new pool and current athletes' names fill the record boards. He's also looking for more hardware.

"I trophied with both, so I guess we're going to try to do that again," he said, referring to last year's runner-up finishes for both teams.

And there's always that elusive girls state championship, for which he said he's holding his breath.

"We need a few stars to align but we're definitely in the hunt," he said. "With any year, we're missing a piece, and we're going to continue to fight and find that piece."

He said his wife, Lara, who also attended Central (although the two didn't start dating until much later) has been his No. 1 fan.

"She knew nothing about swimming prior to me entering her life and she's all in," he said.

Looking back to the days when he was in high school, Barber said he didn't think much about his future.

"If somebody told me I was going to be taking and trying to fill the shoes of Tom Schweer, I would have said, 'There's not a chance.' I never would have thought I had that capability, I'm not sure I'm doing it now," he said.

Schweer most likely would disagree. He has only praise for his former swimmer. 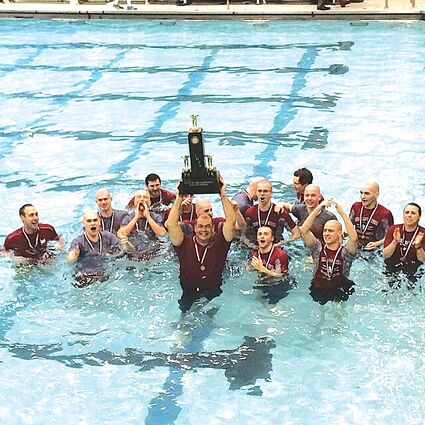 Barber celebrates with members of the 2015 boys swimming and diving after winning the state championship in Winnetka. It was the program's 18th title and the first since 1989, when Barber was a freshman at Central. (file photo)