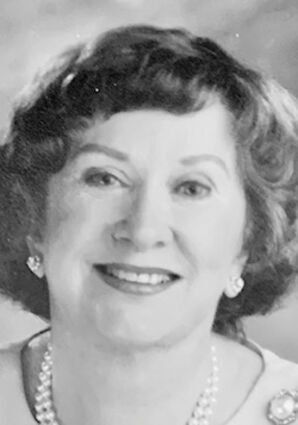 Betty Jean "BJ" Anderson Stroup, nee Hendrickson, passed away on May 1, 2022, at King Bruwaert House in Burr Ridge, with her family by her side.

At 99 years of age, there is, perhaps, no one who lived every day so cheerfully as Betty Jean.

Born in 1923 in Chicago to Robert T. and Linda Louise Hendrickson, nee Frentzel, Betty Jean grew up alongside her older brother, Bill.

Betty Jean was surrounded by a steady example of hard work as she watched her father and grandfather run and grow the Hendrickson Manufacturing Co. She attended Calumet High School and went on to graduate from DePauw University, where she met her future husband, William Stuart Anderson. She majored in home economics and was a member of Delta Delta Delta sorority.

After a telegram proposal during World War II, Betty Jean and Ensign William Stuart Anderson married in 1944. Together, they established roots in Hinsdale where they raised four children. Betty Jean relished her role as a mother and loved raising her sons and daughter on a neighborhood block filled with children.

Beyond her role as a dedicated mother, Betty Jean immersed herself in philanthropic activities. She was a 66-year member of Grace Episcopal Church, where she actively participated in Altar Guild, and she had more than 2,000 volunteer hours at Hinsdale Hospital and Sanitarium. Additionally, her membership and participation to the PEO and the Tri Delta Alumnae group were very near and dear to her heart.

She enjoyed traveling with her husband and close friends, satisfying her endless sense of wanderlust. Never one to miss a party, Betty Jean was present at many of her grandchildren's graduations and wedding celebrations.

They enjoyed 12 years of companionship and travel, splitting their time between their hometowns of Hinsdale and Tryon, N.C.

Berry Jean continued to enrich her life at her retirement community.

She attended concerts and operas in the city, went to art exhibits and Broadway shows, and performed in the K-B Adorables dance group. Her exuberance and love for truly living life well were effervescent.

Betty Jean was also preceded in death by her second husband, the Rev. Dudley J. Stroup; and his daughter Mary (Stroup) Wolters.

She is survived by his daughter, Janet (Stroup) Fox.

A memorial service will be held at 11 a.m. Saturday, June 18, at All Saints Episcopal Church, 4370 Woodland Ave., Western Springs.

Memorials may be made to HCS Family Services Food Pantry, 19 E. Chicago Ave., Hinsdale, IL, 60521 or online at https://www.hcsfamilyservices.org.