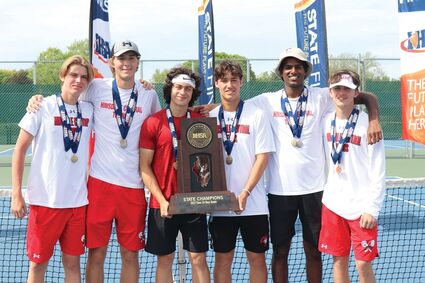 For the third time in four years and the 27th time in history, the Hinsdale Central boys tennis team won the state title Saturday.

The team garnered 49 out of 52 possible points at the IHSA meet May 26-28 in Arlington Heights, easily beating second-place New Trier, which had 29 points.

"In the end, the team did perform as they had all season, which is dominant," coach John Naisbitt said. "(You're) one turned ankle, one flu, one COVID diagnosis away from things changing. You don't have the title until you have the title. We were cautiously optimistic."

"That's a little surprising to go 1, 2, 2, 3," Naisbitt said, adding that nothing really surprises him with the program.

"We come to play at state, and this year we were very much the better team and we showed it," he said.

Ali-Khan and Hernandez, both seniors, faced each other in the final match for the singles title. Although it can be tough to face a teammate across the net, Naisbitt said the situation is not a bad one to be in.

"It's impossible to prep a player to play his own teammate in the finals of state," he said. "When it happens, it's something special, because it shows we had the two best players at state."

Ali-Khan said he tries to approach every match the same.

"It was different because we were on the same team and me and him have been childhood friends for the longest time," he said.

Besides Hernandez, Ali-Khan said his toughest opponent was Thomas Nelson from Jacobs, who will play Division I tennis at Marquette University this fall. He faced Nelson in the quarterfinals, which are weighted more heavily.

"I think his serve was the toughest to break for me," said Ali-Khan, who will play at Purdue University. "That match was crucial. It also gave my team four points. I think we were already ahead of New Trier at that point, but I think that gave us more of an edge."

Naisbitt said Ali-Khan's turning point this season was a loss at the Tom Pitchford tournament, referred to as "mini state."

"It was his only loss of the year," Naisbitt said. "He came off the court and said he did not intend to lose again. From that moment forward, he didn't lose a match, including any at the state finals, conference, sectionals. I think it's a real testament to his mental focus."

Hernandez said he knew heading into state that facing Al-Khan in the finals was a possibility.

"I just tried to treat it like any other match," he said. "If I won or lost, I knew we were still winning the state title.

"I think the moment I will remember most is probably shaking hands with Moose, my teammate, at the end. It was a really cool experience and it wrapped up a really good experience," said Hernandez, who will play tennis at Brown University next year.

Naisbitt said Noah has been a fantastic leader and one of the team's best players, winning the doubles title his freshman year (with Joe Daw) and coming in seventh last year in singles.

"If he had played anyone in the finals besides Mujtaba Ali-Khan he would be state champion," Naisbitt said. "He handled the loss with incredible grace and decorum. Noah is the ultimate teammate. He's a wonderful player and a great person and he shows us how to act on the court and how to act in defeat."

Vallurupalli, who came in third at state last year playing doubles with Ali-Khan, said he was just happy to be able to compete.

"Two weeks before, I didn't know if I was going to play or not, because I injured my finger pretty badly and the swelling was so bad I couldn't move it at all."

He suffered the hairline fracture playing softball in PE class. His partner, Lipari, also was struggling, having had his wisdom teeth pulled the Friday before sectionals.

"We just took it match by match," Vallurupalli said. "We started off very strong the first day. We didn't drop a single game. We were like, 'Maybe we could do this.'

"As the tournament went on, my finger kept getting worse. I think Luca was actually getting better," he added.

The team had accumulated enough points to win the state championship on Friday, so Vallurupalli felt a little less pressure heading into the finals Saturday, when he and Lipari faced a team from Hersey.

"I was just playing loose and the crowd was out there. I could barely feel my finger hurting. It was like I was playing back to normal, which was really satisfying," said Vallurupalli, who will play at the University of Illinois-Chicago next year.

Lipari said once he started playing, he felt more confident and less nervous. He said his partner deserves the praise.

"A ton of the credit goes to Jai," he said. "He pushed through a really difficult injury, and I mean it was just truly remarkable how he continued to play through the pain."

Lipari, who will play at Emory University, said his favorite moments were during the Saturday games when Central players were competing on four adjacent courts at Hersey High School.

Kotarski, a sophomore, and Theriault, a junior, opened with four wins before losing in the semifinals and then beating New Trier to earn third place.

"They came in undefeated and they made it to the semis, where they lost to the same Hersey team Jai and Luca lost to," Naisbitt said.

Hernandez said the team's performance at state was truly remarkable.

"This is probably one of the most dominant teams in history," he said. "I think we won it after the second day. The third day, I think we all could have lost and still won state."

"I'm just proud of the boys for showing up for the three days of the tournament and absolutely playing their guts out for three days," he said. "It shows how good the players were and they really showed up when it mattered."

Going into the finals Saturday at Eastern Illinois University, Central track coach Jim Westphal said the goal was to win the 800-meter run and the 4x400- and 4x800-meter relays.

"Finishing second was outstanding," he said. "There is no disappointment from the coaches' standpoint. Our kids competed and they competed well."

The relays helped the team earn 24 points and a ninth-place finish at state. Batavia won with 37 points.

"I think both the 4x4 and the 4x8 got the baton in or near the lead in the last leg," Westphal said. "It played out how it played out. A different day, we win those relays."

Revord said he went into the final leg of the 4x8 thinking the team could win.

"Unfortunately, I just didn't have it in my legs with 100 to go," he said. "That happens sometimes."

Revord had competed in the preliminaries in the 1,600-meter run and ran the opening leg of the 4x4.

"It's tough to race four events," he said. "It takes a toll on your body, especially with prelims and those distance runs. Every guy on the team did their job."

The team's third runner-up performance came from Watcke in the 800-meter run.

"He's the returning state champ in 3A, so certainly his goal was to win," Westphal said. "It came down to the last 50 meters and the other kid just got him at the end and he still ran great."

Revord said after being injured last year, he was just grateful to be competing.

"You can't be mad at second place in the state," he said. "We were so happy with each other. 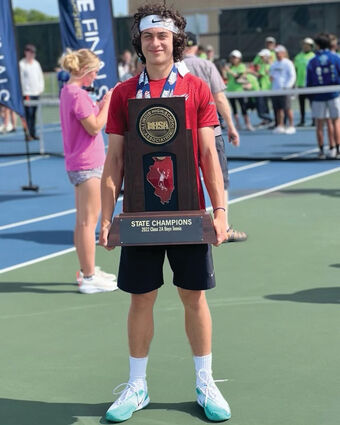 "The special thing about the team that made the meet so special is all the guys build each other up," he added. "I'm really happy to be on that team. It was honestly just an honor to compete at the state meet and give it my all."

Westphal said the coaches are proud of the athletes and the way they competed.

"To get three second places is a major accomplishment," he said.