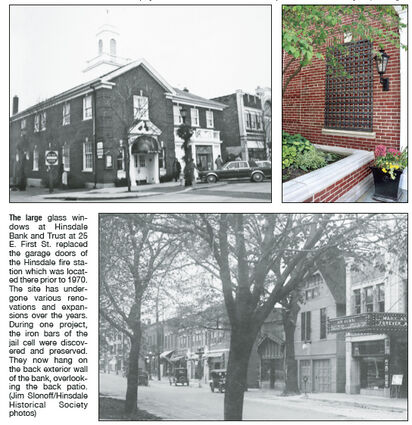 The large glass windows at Hinsdale Bank and Trust at 25 E. First St. replaced the garage doors of the Hinsdale fire station which was located there prior to 1970. The site has undergone various renovations and expansions over the years. During one project, the iron bars of the jail cell were discovered and preserved. They now hang on the back exterior wall of the bank, overlooking the back patio. (Jim Slonoff/Hinsdale Historical Society photos)

Ever notice the stars in relief on the top corners of the front door of 25 E. First St.? Or the red bell mounted on the brick wall?

Both are clues as to the original use of the building, which now is home to Hinsdale Bank and Trust. The Colonial Revival building there and the adjoining one were built in 1935 as Works Progress Administration projects to house the village's police and fire stations. They were designed by Hinsdale architect Harford Field.

The fire station had been located on the site since 1887, when a two-story frame building was constructed on land donated by William Robbins, according to "Historic Downtown Hinsdale"

"The fire house was on the ground floor and village offices and a meeting room were on the second floor," Ziegweid wrote. "By 1913, a one-story brick structure had been erected adjoining and to the west of the fire station. That building was used as the police station and village hall for many years."

The wooden building on the site was demolished and the one-story brick building was encapsulated and enlarged to become a two-story building, according to Ziegweid. Village offices had moved to the new Hinsdale Memorial Building in 1928.

The police and fire stations remained on First Street until 1970, when they moved to a new building - and their current home - on Symonds Drive.

John and Shirley Angelo purchased 25 E. First in 1969 at auction and converted it into a commercial structure that housed Shirley's clothing shop, The Heritage House. The couple moved into an apartment upstairs.

The Angelos owned the building for more than two decades until it was purchased by its current owners, Hinsdale Bank and Trust. An appreciation for the building's history was evident in a postcard the bank sent out announcing its opening in 1993. It featured a picture of the building circa 1935 and read, "Banking the Way it Used to Be."

The building's history continues to fascinate Dennis Jones, who has served as chief executive office since the bank's founding. On a tour of the building, he shared the history of various tenants over the years, starting with his office on the first floor.

"Where we are right now, going way back, was a blacksmith's shop," he said. "When we excavated to build this section right here we found some interesting stuff. The blacksmiths must have had a good time because there were a lot of antique whiskey bottles that we found."

Walking upstairs, he points out where concrete had to be cut out to create a stairway. The current board room on the second floor used to be the sleeping quarters for the firefighters. The fire pole was removed, he joked, as was the frosted glass door - reminiscent of fictional detective Sam Spade - on the magistrate's office. It ended up in the hands of a Hinsdale architect and friend.

"Dennis Parsons decided he needed that door and he got that door," Jones said.

In addition to Heritage House, a number of businesses has operated at the site, including Alta Moda Salon, The Mole Hole, the Mouse Trap, a travel agency, a boys clothing store, an interior design firm, a garden shop and The Courtyard, a resale shop whose sales benefit Wellness House.

When the bank decided to expand in 1999, they built the addition on the back in such a way that The Courtyard was able to keep its doors open.

"We built it in two stages so The Courtyard never had to stop doing business," Jones said.

During the initial renovation, the old jail cell was discovered in the nail room of the salon. Jones said despite contradictory accounts, the bank decided to keep the jail cell doors. They were later mounted on the outside back wall, overlooking the patio, when the addition was built.

Jones clearly is enamored with working in a building with such a rich history.

"I enjoy telling the stories," he said. "I enjoy the fact that this building has stood the test of time through multiple uses, public and private, and is about to get a facelift to continue that well into the future.

"The fact that a historical building sitting in a historic downtown can reinvent itself or have itself reinvented every so often to make sure it's just as relevant in what will be 100 years after it's been built" is something to appreciate, he said.