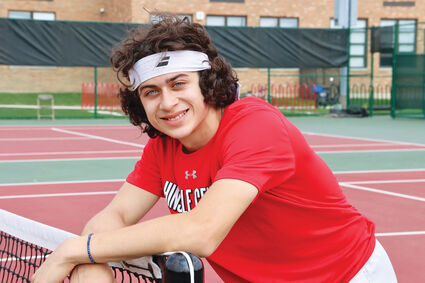 When did you first start playing tennis?

I first picked up a racket at around 7. My dad played college tennis, so that kind of had an impact on me.

The competitiveness and then seeing my growth on the court - how I can improve and reach more goals and kind of getting the best out of myself.

I think strategizing with the game and overall I've gotten stronger. It kind of helps me on the court. I've been working with my coach at Hinsdale Racquet Club. His name is Vadym, and working with him has helped me. All these tournaments - every loss, every win, I feel like I learn something.

Do you have any pre-meet rituals?

I have to at least have my water and Gatorade out during the match. I can't put it in my bag. It has to be out where I can see it. I also have this favorite shirt I like to wear when I play tournaments.

My goal is obviously helping (to win) a state title. Anything short of that, I feel like we're not reaching our gaol. For me I know that my goal is to win for singles.

What are your plans after graduation?

I'm going to Purdue University. I'm going to study biology most likely (to become a doctor). I will be representing Pakistan's national tennis team at the Davis Cup next year.

Why does coach John Naisbitt like having Ali-Khan on the team?

Mujtaba (or as we affectionately refer to him, "Moose") Ali-Khan is a four-year varsity starter who led the team to state championship his freshman year and a runner-up his junior year. Currently one of the top-ranked players in the state, he is a coach's dream. His conduct is an example to all that you can play competitive tennis and act as a gentleman on the court. He respects his opponents, teammates, coaches and site officials. He is a model for tennis excellence and character. He has left a legacy here at Hinsdale Central and our loss will be Purdue's gain. Thanks, Moose, for all the hard work and dedication the last four years for HC tennis. You were and are a true champion.