Immanuel Hall was built from the soul 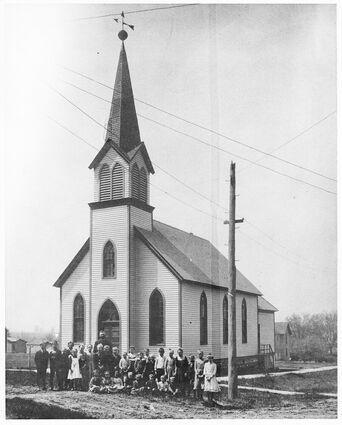 The youth of Immanuel Evangelical Church gather outside in this 1905 photo. German settlers established the church, where children were taught the German language and culture. (photos courtesy of the Hinsdale Historical Society)

In the late 19th-century, the west side of Hinsdale was home to an enclave of German immigrants. These faithful churchgoers would tread the village's wooden sidewalks to the north of Plank Road (today's Ogden Avenue) every Sunday to attend St. John Evangelical Church of Fullersburg.

In 1898, weary of the distance and at odds with the church's new pastor, several decided to establish their own congregation. They called upon Brookfield pastor Rev. Carl Luedeke to lead the new Deutsche Evangelisch Lutherische Immanuels flock. But lead them from where?

"Rev. Luedeke was pushing vigorously the idea of building a church, which materialized in 1900," according to a history of Immanuel Evangelical Church contained in the church's 50th anniversary program from 1948. "(William) Vornsand was the contractor and all the carpenter work was done by members."

The corner of Grant and Third streets still displays their fruit of their labor, a simple yet enchanting Gothic-style frame structure known today as Immanuel Hall. Its days as a dedicated place of worship came to a close in 1964. When the property was listed in 1998 and demolition seemed imminent, the village, with the help of state grant money, purchased it and subsequently deeded the site to the Hinsdale Historical Society.

May is Historic Preservation Month, and Carrie Wester, president of the historical society, said holding on to these community treasures is vital.

"Not everyone is a historian, but I think it's important to keep this heritage," she said.

The church was built in eight weeks and cost just $3,000 thanks to the all-volunteer crew, according to archival records. One can picture worshipers a century ago stepping through the entrance on Grant, crossing the small foyer and receiving a spiritual lift from the 10 stunning stained glass windows flanking the sanctuary.

Pews on either side of a center aisle faced the altar. A staircase from the foyer leads up to a small balcony where the choir and organ were located, that is until both were repositioned at the front of the church.

Originally services were completely in German, and the church's back room was furnished with benches and desks for the youth.

"Here the Sunday School assembled, and the minister also held school every Saturday for several hours, to teach the children reading and writing high German and to supplement Sunday school lessons," the anniversary booklet recounts.

Many villagers at the turn of 20th century referred to Immanuel as "the pumpkin church" because of a distinctive bulb feature on its spire.

In a sign of a growing fellowship and an increasing budget, the steeple was replaced in 1920, the same year the church was raised in order to dig a basement for fellowship functions.

"Church socials/gatherings would be held there," Williams said. "The raised portion on the east side runs all the way across the lower level and used to serve as a stage."

The basement is now home to the Roger and Ruth Anderson Architecture Center, a rich archival repository of the village's evolution structurally and otherwise.

A 402-pipe organ was installed in 1923, and the stained glass windows were put in the following year. A parsonage was erected in 1908 directly behind the church, on land which is now vacant. 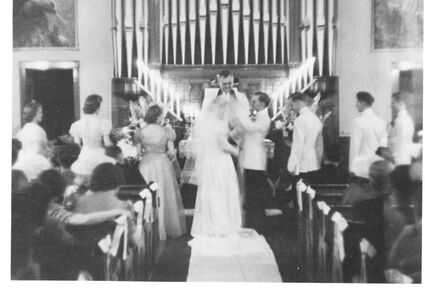 The church's sanctuary hosted countless life events such as baptisms and weddings, like this one from 1941. The church closed in 1964 and was purchased by the village and transferred to the Hinsdale Historical Society to be preserved as an event space.

"While the first floor of this parsonage was the minister's residence, with an additional bedroom upstairs, the rest of the second floor was left as one large room which was to be used for meetings and entertainments," the booklet reads.

In June of 1947, to finance a badly needed exterior paint job, member families were given little church-shaped piggy banks to save change. By the following summer, the $2,124 collected was enough for the work.

Just prior to the historical society taking possession of Immanuel Hall in March 2001, it was listed on the National Register of Historic Places. Two years earlier it had been designated as Hinsdale's first historic landmark. The move to save the building became the impetus for other initiatives, like the passage of the village's historic preservation ordinance and formation of the historic preservation commission.

So while Immanuel Hall may no longer be a place sanctified solely for spiritual matters, it still enshrines the spirit of the community.

"Preservation is more than saving a building," Wester said. "It's also saving the stories of yesterday."