Thoroughfare to be rebuilt in concrete in four sections, with work to finish in October 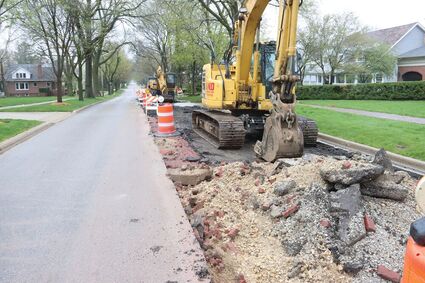 Barricades block off Garfield from Fourth to Seventh streets as work begins on a project to rebuild the street, which will require the Fourth of July parade to be rerouted. The village also is resurfacing several streets as part of its summer master infrastructure plan work. (Jim Slonoff photo)

Garfield Avenue on Monday was closed between Fourth and Seventh streets as part of a $2.1 million project to rebuild the street between First and 55th streets in concrete.

The roadway will be rebuilt in four sections, said Al Diaz, assistant village engineer. The second phase will be just north of the first.

"We actually stipulated that the section of Garfield from First to Fourth streets should be addressed when the middle school is out of session," Diaz said.

Depending on the length of the section, Garfield could be closed from four to seven weeks.

"There won't be any cross street access within the closed section because those intersections will be paved in concrete," Diaz said.

Access to Garfield off 55th Street also will be prohibited for the entire project to help limit the amount of through traffic in the construction zone, Diaz said.

The process involves digging up the existing roadway, installing forms, pouring the concrete and letting it cure, which can take up to a week.

"Typically we design things the year prior and then put it out to bid early in the season to take advantage of better pricing and to get any early start on the project, especially one this large," he said.

Crews try to begin work in May so the construction season can be finished up in mid-October.

"Come late October, it gets dicey as to when we can pave," Diaz said. "A lot of the materials we use have temperature constraints, even if it's asphalt or concrete. If it gets too cold, it takes longer to cure the material."

Residents can check construction progress on the village website at https://www.villageofhinsdale.org. Officials expect to post weekly updates on Thursdays or Fridays.

Diaz encouraged residents to be patient.

"The contractor is already showing signs of trying to expedite some of the work by having multiple crews and contractors on site," he said. "That shows us he's looking to try to get as much work done as fast as possible. They may end up finishing early, but with the weather, we never know."

"We do have to do some maintenance. There will be some patching and some crack filling, but not much," he said. "There's more maintenance with the asphalt pavement."

The village also will resurface 10 streets and two parking lots this summer (see sidebar) at a cost of almost $720,000. The resurfacing budget was only $615,000, but the Garfield project came in $557,000 under budget, Trustee Neale Byrnes said at last week's Hinsdale Village Board meeting.

"So we're good to go with the entire project," Byrnes said.

The Hinsdale Village Board Tuesday awarded the 2022 resurfacing project to M&J Asphalt at a cost of about $720,00.

• North Bruner Street from North to one half block south

• North Monroe Street from Ogden Avenue to one half block south

• North Oak Street from Minneola to The Lane

• South Clay Street from Eighth to the south end

• Merrill Woods Road from Birchwood to the south end

• the parking lot at Lincoln and First streets