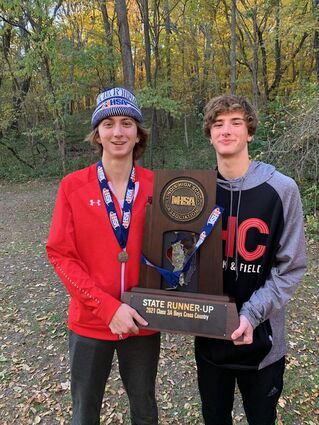 Henry (left) and James Gruber, part of the varsity boys cross country team that came in second at state last fall, are being celebrated by the boys track and field team with a special CPR training and fundraiser for the Mend a Heart Foundation. (photo provided)

Members of the Hinsdale Central boys track and field team will leave their Wednesday, April 27, practice with a new skill - one they can use to save a life.

The athletes will be trained in CPR through a partnership with the Mend a Heart Foundation in Clarendon Hills. And there's no telling when that training might come in handy, said Chicago firefighter Josh Daisy, a volunteer who is leading the training.

"I think it's a very valuable skill that everybody should know," Daisy said. "It's not just for people you don't know. It could be at your own family party."

No one knows this better than the Gruber family of Hinsdale. The fundraiser is in honor of brothers Henry, a senior, and James, a junior, who were both on the cross county team that placed second at state last fall. Henry beat his own personal best by 40 seconds and was the team's fourth runner to cross the finish line. That accomplishment was noted by assistant coach Noah Lawrence in a Nov. 6 Tweet.

"What does team mean? Fundamentally, it means being there for each other. This team: we had a different order every meet. Guys took turns carrying the load all season long. Henry Gruber had no better than seventh for us ... until today. 'Henry, you're a hero!' State runner-up team!"

Just weeks after that meet, Henry abdicated the title of hero to his brother.

The Grubers were visiting family in Minnesota for Thanksgiving break. Henry and James were in a car with a cousin and his friends the day after Thanksgiving when James noticed his brother was unconscious, according to a Dec. 20 blog Lawrence wrote about the days' events. James called 911, and the operator told him she would walk him through performing CPR.

Paramedics arrived within four minutes and took over for James after he finished his second cycle of CPR. They tried to shock Henry's heart three times unsuccessfully before loading him into the ambulance.

"James asks his cousin and his friends to say a prayer with him," Lawrence wrote. "On a crystalline Minnesota night, four teenage boys kneel along a suburban road and beg God for mercy. James told me, 'I don't know if my cousin and his friend are religious or not. But, I asked them to pray with me. And 30 seconds after that, (the paramedic) stuck his head out of the ambulance and told me, "We got a pulse." ' "

Henry's heart had stopped beating for eight minutes. He regained consciousness after he was in the ICU for several hours and later had surgery for his pacemaker and defibrillator. After spending a week in the hospital, Henry was able to return home. He's been working toward a full recovery since.

"Under extreme duress, James acted with incredible poise," Lawrence wrote. "He did absolutely everything right, from recognizing the emergency immediately to performing CPR correctly. He saved his brother's life. James Gruber! You're a hero!"

Participants in the April 27 training will learn that new guidelines from the American Heart Association have changed the way CPR is taught. Science has shown oxygenated blood stays in the body longer than originally believed, so CPR is now focused on chest compressions, Daisy said. Mouth-to-mouth breathing is no longer required.

The training is part of a spring fundraising effort organized by Molly Watcke of Hinsdale, mom of junior runner Dan Watcke. She said she wanted to do something to honor the Gruber brothers, and when coach Jim Kupres approached Henry with the idea, Henry suggested the Mend a Heart Foundation as the beneficiary. Watcke had had the same idea and reached out to Bridget O'Meara. O'Meara, and her husband, Brian, started the foundation after their son was born with hypoplastic left heart syndrome. Henry also was born with a genetic condition relating to heart function. Although O'Meara didn't know what had happened to Henry, she did know the family from the time her son and James were at Clarendon Hills Middle School together.

"She had the idea of the CPR training," Watcke said. "I was like, 'Ooh, this

She expects about half of the more than 100 kids on the team will participate, with the track parents booster club picking up the cost of the certification cards.

"We'll probably have about 50 of the kids do the training. A lot of the kids are either the distance crew or kids on the team that are friends with the Grubers from school and growing up," Watcke said.

O'Meara said the Grubers' story demonstrates that cardiac arrest can happen to anyone at any time.

"I think something that I never realized until going through what we've gone through with our son Liam is how common congenital heart defects are," O'Meara said. "I think a lot of people don't realize their prevalence."

Having seen the popularity of hooded sweatshirts among her son and his friends, Watcke and other parents decided to sell hoodies to raise money for Mend a Heart. The initial sale raised almost $2,000, and more might be available, depending on demand (see sidebar).

Watcke said she's not surprised that James, whom she has known since his freshman year, did what he did. She remembers him offering to unload her dishwasher once while he was at the house waiting for Dan.

"That was my first impression of him," she said. "It's probably not really surprising that he went to these efforts for his brother."

"Every time I see them, I'm like, 'Wow!' I'm so happy that they're here and we're celebrating this'," she said. "When you know what happened, this really would have taken a different turn had James not done this for his brother. He really is a hero."

Residents interested in supporting the work of the Mend a Heart foundation can make donations online at https://www.mendaheart.org/donation.

A portion of ticket proceeds from the McCarthy Invite at 5 p.m. Friday, May 6, at Hinsdale Central also will be donated to the foundation.

While the initial deadline to purchase a $50 hoodie honoring the Grubers and supporting the foundation has passed, if demand for more is high enough, additional shirts will be made. Email Molly Watcke at [email protected]