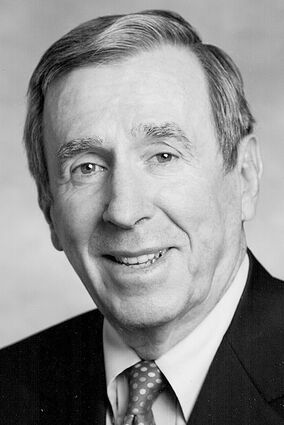 Anthony "Tony" Richard Pasquinelli, 88, of Hinsdale, died April 17, 2022, at his home surrounded by his family.

Tony was born in 1933 as a first-generation Italian-American to his parents, Bruno B. and Mabel M. Pasquinelli, in Chicago. He lost the love of his life, Mary Ann Pasquinelli, née Roche, after 57 years of marriage on Nov. 2, 2017.

Tony had a great appreciation and respect for education, which began early on. He attended Lindbloom High School in 1949, where he was captain of the basketball team. In 1954, he earned his bachelor's in accounting from the University of Illinois. Tony was so passionate about education that he sent all seven of his children to college, and in some cases, graduate school as well.

Drafted into the U.S. Army in 1956, Tony lived in Fort Lee, Va., for two years. Upon his return to Chicago, he earned the recognition of top lumber salesman at Lakeside Lumber. Tony and his brother, Bruno, co-founded a construction company in 1958. Unsure of what to name their business, they went to their father for advice, who told them, "put your name on your business so you'll always be proud of it." Taking their dad's advice to heart, they named their venture Pasquinelli Construction Co.

Over 50 years, the company built 45,000 homes across 13 metro markets in 13 states, rising to their pinnacle in the early 2000s, when they became the 24th largest home-building company in the United States and the fifth largest private home-building company in the country. Bruno and Tony were not only business partners, but dear friends who raised their children together, and spent many happy years vacationing in Aspen, Colo., at Christmas time, where they shared a love of skiing.

The 1980s and 1990s were very busy for Tony, as he held many leadership positions at organizations such as the Residential Construction Employers Council (president), Matteson-Richton Bank (board director), Beverly Bank Matteson (board chairman) and St. Paul Federal Bank (director). Perhaps his proudest personal achievement was his involvement in The Center for Performing Arts at Governor's State University, where he was a co-founder and board member for many years.

Tony's passion for real estate and education led him to establish the Distinguished Chair in Real Estate at the School of Real Estate at Roosevelt University, Chicago, where he served as chairman of the advisory board of the Marshall Bennett Institute of Real Estate.

Tony and Bruno established the Pasquinelli Family Foundation, a philanthropic endeavor designed to give back to the communities that were important to them, including the Caritas Society (Saint Coletta), Misericordia, Northwestern Hospital, Respond Now, Common Hope, Marian Catholic High School and many others.

Tony was preceded in death by his sister and best friend, JoAnne (Leslie) Barnard.

A funeral Mass was said April 20 at St. Francis Xavier Catholic Church in La Grange. Interment was at Holy Sepulchre Cemetery in Alsip.