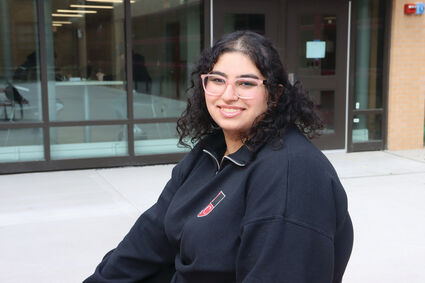 Tomorrow, April 22, is Earth Day, the annual celebration of our planet.

At Hinsdale Central, sophomore Ritvi Khurana is helping light the way toward a healthier globe as vice-president of the school's Ecology Club. She is among the cultivators of this week's Earth Week activities dress days, and was clad in all black when interviewed on Tuesday for the Lights Out! theme.

On Thrifty Wednesday, students were encouraged to wear secondhand clothing and were also furnished with a QR code linking them to a Morton Arboretum Zoom call on climate change.

"We're also having an informational talk about bumblebees and how they help the environment," she said.

Saving our habitat was not exactly a front-burner issue for Khurana until the pandemic hit. With her normal pursuits suspended, she found herself scrolling social media and reading news reports.

"I learned more about the world and I was concerned," she said. "I had almost an epiphany, and I was like, 'I really care about this.' "

Khurana's youthful affection for polar bears took on greater significance as she discovered how endangered they had become due to global warming.

"I never knew exactly what caused that until recently. That (passion) just grew, and I joined Ecology Club," she related.

Being fully remote her freshman year precluded her from serious club involvement. So she threw herself into leadership this year.

Instilling the same level of passion in her heavily scheduled peers is challenging, she acknowledged.

"There aren't many people in Ecology Club, just a handful of us," she said. "I'm hoping we can recruit more members."

To that end she was planning to address classmates during a lunch forum today on the club and its work. She also leverages social media to advocate for earth-friendly practices.

"If you use (social media) the right way, then it's a great tool," Khurana commented.

Conveying the urgency is the toughest hurdle.

"I know everyone cares and they know what's going on, but we need people to put actions behind their words," she said. "Scientists have said that by 2030, if we don't take action, there could be severe consequences."

Today's theme is floral fashions, with sustainable artwork available for students to purchase. Tomorrow for Earth Day members will plant flowers on campus for Operation Pollination.

Sharing ideas, Khurana has discovered, is fruit-yielding in its own way.

"Having another group of people actually with me to be able to discuss things that I'm also passionate about it incredible," she said. "I really like doing what we're doing."