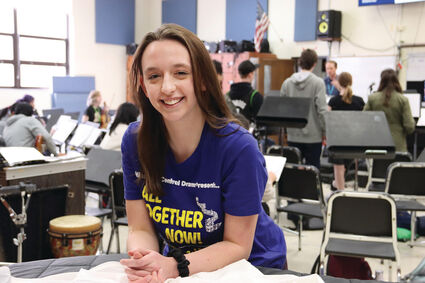 The show centers on a fictional spelling bee at the equally fictional Putnam Valley Middle School. First produced on Broadway in 2005, it features a cast of quirky characters and a Grammy-nominated soundtrack filled with dozens of songs.

Koziel has been part of the Hinsdale Central theater scene since her freshman year, but COVID got in the way in 2020 and 2021, making this the first time the junior from Clarendon Hills will perform on stage in one of the school's spring musicals. She previously appeared in "Wizard of Oz," "High School Musical" and "Dear Edwina" at Clarendon Hills Middle School, and she also participated in Music Makers of Western Springs.

"It's always been something that I really love to do," Koziel said.

Of all of the roles she's played so far, Koziel said Peretti is her favorite. The colorful character is the bee's moderator, Putnam County's top-producing real estate agent and a former bee champ herself.

"She wants to relive the glory," Koziel said.

Throughout the show, Peretti breaks into song in what Koziel calls "Rona moments." The musical outbursts let the audience know what's going on in the character's mind.

Like most roles in the show, Koziel's character remains on stage throughout the production. The show is taxing and challenging, Koziel said, but also hilarious and unexpectedly enlightening.

"The 25th Annual Putnam County Spelling Bee" offers colorful characters, lots of music and a good mix of what she called "dumb and smart" humor.

"It is hilarious," she said.

Koziel said she's thrilled to be back on stage with some of her favorite people.

"The community is the biggest thing," she said. "That's my group. That's the place where I feel the most comfortable."

Koziel also frequents the stage as a member of the Hinsdale Central wind ensemble's flute section, and she exercises her writing skills as part of the Devil's Advocate staff.

And while her career goals are pointing toward political journalism, Koziel said theater will always have a place in her life, whether that's as an actor on stage, as a member of the audience or even helping people to find their seats. She recently secured a summer job as an usher at Drury Lane Theater in Oakbrook Terrace.

The summer also includes plans to see "Moulin Rouge" in Chicago, a few college visits and a family reunion in Hilton Head, S. C. She also plans to audition for Bamtheatre's summer production of "Les Miserables."

Koziel has a busy summer ahead, but first, there's a show to put on.