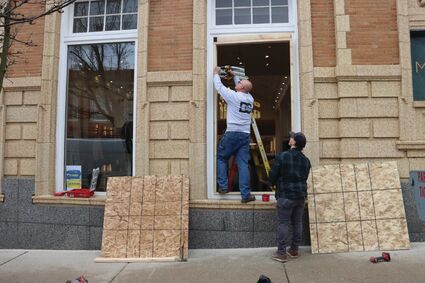 A sledgehammer lies on the sidewalk surrounded by broken glass outside Marcus on the First Street side of the clothing and accessories store. Thieves early Monday allegedly used the tool to smash the window and make off with more than $50,000 in high-end purses and bags. Crews boarded up store later in the day. (photo provided by Hinsdale Police, Jim Slonoff photo)

Police Chief Brian King said three offenders entered the store while one stayed in the vehicle. The loss is estimated at more than $50,000.

Owner Marcus Lemonis on social media expressed his disappointment with the incident, noting his stores have been targeted on numerous occasions. But vowed to remain open.

"I"m not closing any of the three Chicagoland stores," Lemonis posted. "Even though collectively they have been robbed or looted almost 10 times in the last 24 months."

Concerned merchants gathered Wednesday morning at the Hinsdale Chamber of Commerce office to meet with King about the rise in grab-and-go or smash-and-grab robberies.

King said these incidents aren't random but rather product-driven.

"There's a high market now for those high-end purses," he related.

Several proprietors asked if the department could provide more of a presence in the downtown. King responded that usually there are three patrol cars working overnight and that residential areas remain the larger source of activity.

"Our most prevalent overnight crime is still in the neighborhoods with people coming in and stealing cars," he said.

The car thefts are usually related to subsequent burglaries and robberies.

"Almost every serious felony crime we have in town is by use of a stolen vehicle," King said.

Asked what merchants can do to help prevent future criminal activity, he encouraged them to take note of any suspicious activity, like a car backed into a angled parking spot, and notify the police. But those notifications should not be predicated on race or appearance.

"I understand why people are concerned, but our response and our activity has to be based on observable data," King said.

An employee of one store reportedly notified the police of suspicious people looking in Marcus' window on Sunday.

King said it was very unusual from his experience for a smash-and-grab crew to scout a location.

"Their work ethic was a little higher than what we typically see," he said.

One merchant suggested upgrading security measures, like outfitting store windows with a film that prevents windows from shattering or putting sensors on doors and windows.

King said at times there's a lengthy lag getting the alarm report from the security firm to the police department. With the current demand for purses and bags, he said stores carrying those goods should consider eliminating the middle man. 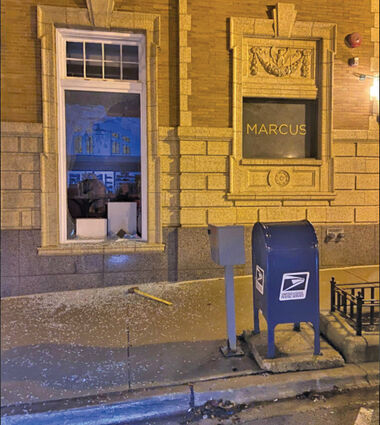 "We would like you to direct-connect to (police) dispatch because it just reduces the delay," he said, citing how that was done with car dealerships when they were being targeted last year.

More than lost merchandise, merchants expressed fear for the safety of their employees and customers. King said resisting perpetrators risks escalating the level of violence and cautioned against it while offering training for store staff on how to handle such a situation.

Eva Field, the chamber's president and CEO, said members want to know how to respond.

"They not only want (police) help but a plan of action," she said.

No arrests have been made in the incident, but the investigation is ongoing.