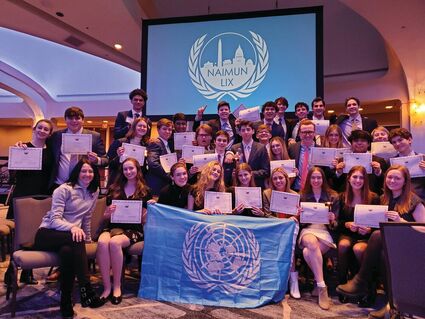 Thirty members of the St. Ignatius College Prep Model UN team returned from Georgetown University in February with a national title - the first in the team's 23-year history. Coach Diana Haleas (front left), a resident of Western Springs, founded the club in 1999.

While other children his age were busy with Little League games and trips to the swimming pool, fourth-grader John Coyner of Hinsdale was researching and discussing how to confront violent extremist groups in the Middle East as a delegate at the Model United Nations and Debate Camp held each year at The Community House.

Nearly eight years later, Coyner is a high school senior and a member of the National Model UN Championship team.

Coyner, fellow Hinsdalean Annika Geiersbach and 28 other members of the St. Ignatius College Prep Model UN team traveled to Georgetown University in Washington, D.C., in February to compete in NAIMUN LIX, the largest conference of its kind in North America. Competing against nearly 3,000 students from more than 100 schools, the team came out on top for the first time in its 23-year history.

In addition to the Best Large Delegation award, Geiersbach was awarded an honorable mention for her role in the Commission on the Status of Women Committee, representing the Russian Federation. Coyner was named Outstanding Delegate in the Alibaba Board of Directors Committee. All 30 participating members won individual awards in addition to the team award.

Model UN is a competitive simulation of international policymaking. Students play the role of delegates from different countries and attempt to solve real world issues with the policies and perspectives of their assigned country. Team members are required to do extensive research, write numerous papers and speeches and exercise debate skills as they simulate global discussions throughout history and the present day. Participation requires skills in negotiation, diplomacy and parliamentary procedure, among other things.

"There's a lot of theatrics involved," said Geiersbach, who portrayed a representative of Russia on the women's rights committee at the Georgetown competition.

"I have to explain myself from Russia's perspective," she said.

In addition to hours of preparation and research, a typical four-day competition requires students to write 25 to 30 speeches meant to support their views, and persuade others. Many are written on the spot, with little time to gather data.

"Every two weeks you're researching for a new position that you're going to hold," Coyner said.

Coyner and Geiersbach are leaders among the 120 members of the St. Ignatius team. In addition to twice-weekly team meetings, each spends many hours a week researching and preparing for the next competition. The experience has broadened their knowledge of the world and its history, but that's just the beginning.

"It's made me a more compassionate person," Geiersbach said. Through Model UN, she said she's learned to see things from different perspectives, and she's become more curious about and accepting of cultures different from her own.

"It's fostered my love of international relations," she said, as well as her love of language and culture.

Coyner said Model UN has equipped him with public speaking skills, leadership skills, the ability to negotiate and countless friendships and memories.

"There's something in Model UN for everyone," he said.

Camps will be held at The Community House July 11-15 and at McClure Junior High School in Western Springs July 18-22.

Haleas said winning the Georgetown event is the highlight of her decades-long career - a career that has taken her and her students to Russia, Japan, Netherlands,, China, Germany and all over the United States.

"Covid unfortunately put a stop to that," she said of the team's international travel, but she hopes it will soon return. Meanwhile, she and the team are preparing for the final competition of their undefeated season.

In preparation for the Boston competition, Coyner is researching his role as a U.S. House representative in 1945.

"It really has to do with the ongoing suspicions of members of the House of Representatives sympathizing with Russia," he said. 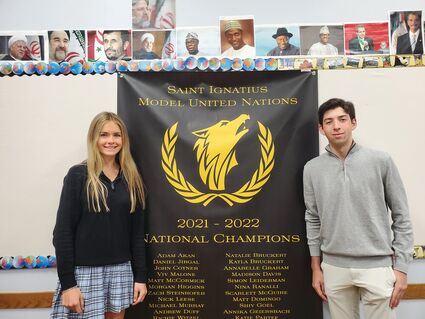 Boston isn't just the last competition of the year for Coyner. As a senior, it's the final competition of his high school career. He plans to pursue a degree and career in international politics and affairs, but Coyner said the skills and friendships he's gained through Model UN are sure to help him no matter where life takes him.