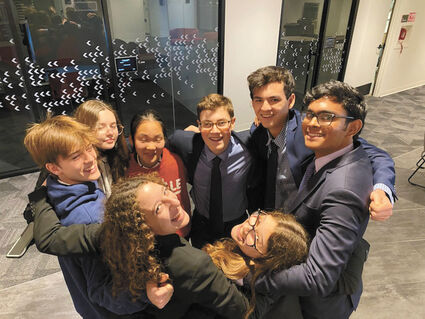 The Hinsdale Central Debate and Scholastic Bowl teams performed well at their state meets last week. Debate team member Will Schmeltz said having teammates in the audience for his quarterfinal round with partner Sebastian Attlan was encouraging.

At the IHSA Debate state tournament March 18-19 at Illinois State University, three of the Red Devils' four two-person teams reached the final eight, or Octafinals, with the duo of juniors Sebastian Attlan and Will Schmeltz making to the quarterfinals.

Social studies teacher Jen Hafner, in her first year as team sponsor, was happy with the results.

"They did a great job at state," Hafner said.

Over the course of the season, team members had to develop position statements and rebuttal arguments both for and against hot-button topics including cryptocurrency and the legalization of drugs. At the state final, the issue was the benefits of organic farming.

Schmeltz, who represented Central in last year's virtual state final, said he was excited to compete in-person this year.

Confidence was high going into the meet, especially after three of Central's teams qualified at the district tournament for nationals June 12-17 in Louisville, Ky.

"We kind of had expected to do well seeing how well we did at district," he remarked. "Our goal was to kind of see where we could go from there."

Day one started at 8 a.m. and involved five hour-long rounds, he said. Waiting for results is perhaps the most agonizing part.

"It's a long day, and you don't even find out how you've done until they tell you after all the rounds," Schmeltz said. "It's kind of a crazy tournament."

For the public forum discipline, he and Attlan would alternate through the four sections of each round: Schmeltz gave the constructive case, Attlan presented the rebuttal, then Schmeltz delivered the summary speech and Attlan concluded with the final focus.

"The other team was very, very good. We ended up eking out the win, and we were super excited that we competed on such a high level," he said.

By that point, the two had a strong grasp on all sides of organic farming, he joked.

"We'd been prepping that for a while and work really hard with the rest of the team to make sure we know every side of the argument - like saving bees or deforestation," Schmeltz said.

But that doesn't preclude some butterflies.

"It's almost always nerve-wracking going into a round," he said, noting the proceeding becomes less scripted as it unfolds. "There are so many different things you have to ready to rebut and respond to."

"It's really cool how it works. Everyone is super-invested. We're like one big team and we're all working together and everyone feels passionate about it," he said.

"We had a very successful season in the West Suburban Conference, going 15-0 in conference matches and winning both the regular season and post-season conference tournament," he said. "At Saturday tournaments we fared well, finishing fifth out of 54, fifth out of 36, and third out of 30."

The state series featured fierce competition, with the Devils capturing two narrow wins in sectionals and two hard-fought wins at the state finals.

In addition to a handsome trophy, the fourth-place finish earned them another reward.

"We qualified for nationals and will attend the Partnership for Academic Competition Excellence national tournament held in Rosemont on the first weekend in June," McCloud said.