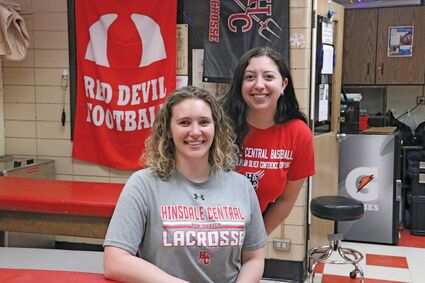 Hinsdale Central athletic trainers Alex Kennedy and Sam Bell say their job requires an even-tempered approach with students. "You have to go with the flow and have a good sense of humor," Bell said, "but also have the ability to put your foot down when you need to." (Jim Slonoff photo)

What do athletic trainers do?

The state runner-up trophy was on the line for Hinsdale Central's boys swim and dive program late last month. But injuries threatened to undermine a key relay team's performance.

Athletic trainers Sam Bell and Alex Kennedy came through, and so did the relay, helping the Red Devils bring home the hardware.

"One kid came over to me and was like, 'Thank you so much!' and just gives me the biggest hug, because he wouldn't have been able to swim the race," Bell recounted. 'That was a really cool moment."

March is National Athletic Training Month, acknowledging those who administer treatment - often on short notice - to keep young athletes on their game, from pre-game ankle taping to post-competition shin splints.

"It's never-ending influx of people," said Kennedy in the basement training room.

And spring can be extra relentless.

"The 13 sports brings a lot of kids, more than our winter

Plus they have to be ready to respond when Central is the host school.

"We have a lot more home events per day in the spring than we typically do in the fall or winter," Bell said. "Some days we have 12 home events. Just juggling that between the two of us and running around making sure that everyone's taken care of."

A thank-you poster features comments from appreciative students, often of the tongue-in-cheek variety.

"They taught me about Frederick Douglas," reads one.

"The sweetest!" proclaims another. "They laugh at my pain."

The remarks speak to the close connections Kennedy, in her fifth year on staff, and Bell, in her third, forge with their prep patients. Some stop by for the relational care as much as the medical care.

"We have our 'frequent fliers,' " Kennedy quipped of their regular visitors.

From dating to college decisions, they become pseudo-therapists for more than physical recovery.

"They'll just sit and talk to us for hours on end," Bell added. "Them having that comfort allows us to help them as much as possible."

As former high school athletes themselves, they can easily relate to the teens.

"We both played sports in high school and both of us were injured," Kennedy said. "That kind of led us here."

"I wanted to be around sports even after I was done playing," Bell commented. "This way I was able to help people, which is very nice."

While some might regard meeting with an athletic trainers as a harbinger of going on the injured list, that's not how they see their role.

Reconnecting with alums is among the payoffs

"They'll stop back all the time and come say 'Hi' to us," Bell said.

And knowing that students were able to pursue their passions is the sweetest reward.

"Just that we were there to support them through their career," remarked Kennedy.

"It's fun to get to see them grow up and mature as a person over the four years," Bell said.