Federal prison terms handed down in heist, other suspects still at large 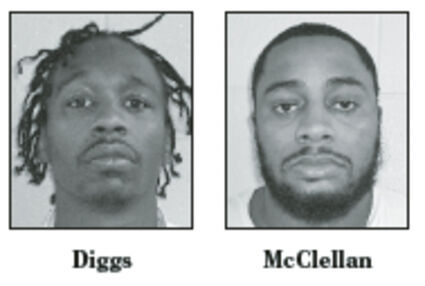 A federal judge last week sentenced two men to prison for their roles in an armed robbery at a Hinsdale jewelry store nearly five years ago.

U.S. District Judge Gary Feinerman on March 3 sentenced Tobias Diggs, 28, of Chicago, and Joshua McClellan, 32, of Oak Lawn, to 11 years and 8 years, respectively, in federal prison for their participation in robbery of Razny Jewelers at gunpoint the morning of March 17, 2017, according to a press release from the U.S. Attorney's Office of the Northern District of Illinois.

More than $400,000 in watches and jewelry were stolen in the heist that authorities allege was carried out by four individuals. Marvon Hamberlin of Chicago was indicted in the case and is a fugitive; a warrant has been issued for his arrest. A fourth individual has not been identified.

A federal jury convicted Diggs and McClellan Oct. 22, 2020, on robbery, firearm and other charges after a six-day trial. According to evidence presented at the trial, the perpetrators planned the robbery in advance. McClellan drove the getaway car - a Lexus sport-utility vehicle - while Diggs and the other robbers entered the store, pointed a gun at a female employee and tackled a store security guard. Diggs then hit the female employee with the gun and dragged her by her hair to a back room, while he and the others gained access to the store's safe and stole the merchandise.

The defendants later sold, attempted to sell or disposed of some of the stolen items in the Chicago area and in Atlanta, Ga.

The sentences were announced by John Lausch Jr., U.S. Attorney for the Northern District of Illinois; and Angie Salazar, special agent in charge of the Chicago office of Homeland Security Investigations. The officials cited the Hinsdale Police Department for providing valuable assistance in the investigation, along with the Oak Lawn Police Department and the FBI Chicago Field Office's Cellular Analysis Survey Team.

"We appreciate the work of the U.S Attorney's office in putting together the prosecution of this case. It was an audacious crime that impacted the entire community," King said. "Make no mistake, when violent crimes occur in Hinsdale we will use all resources available from both the state and federal level to ensure that the offenders are held accountable."

"We continue to work with our law enforcement partners and to bring the remaining two defendants to justice," he said.