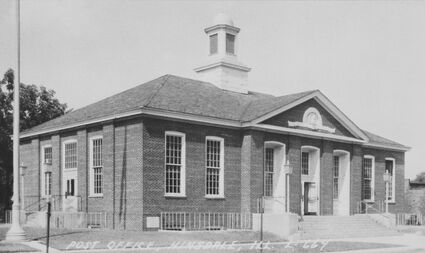 Going postal - This photo in Sandy Williams' book, "Images of America - Hinsdale," is of the post office on Garfield and Chicago avenues. Hinsdale's village president at the time was William Regnery, who worked tirelessly in securing the location and also personally donated money for the project. "Through some difficult maneuvering the site of the current post office was secured in 1937. With the blessing of Hinsdale's plan commission, Regnery and others traveled to Washington, D.C., in 1939 to persuade the Federal Works Administration to design the building to harmonize with Hinsdale's Memorial Building. With their effort successful the stately building opened in 1942."