Denied a postseason last year due to COVID-19, Hinsdale Central's boys swim and dive team made the most of its 2021-22 campaign, capping one of the best runs in its storied history with a second-place finish at last weekend's IHSA state final.

"It's the best season that we've put together for dual meets, invitationals and postseason," varsity head coach Bob Barber said.

And it was a true team effort.

"We didn't have one individual that we said, 'You have to score in the top six for us to get a trophy,' " he said.

Some solo performances did make a splash, however, with freshman phenom Josh Bey's second-place 100-yard breaststroke among them. Competing like a veteran in his state meet debut, Bey posted a time of 54.96 and shattered the sub-55-second mark for the first time in program history.

"I knew I had something in me, but I really didn't see that coming," Bey said of his exploit in front of the many enthusiastic supporters who made the short trip to the FMC Natatorium in Westmont. "I was surprised, and it was just crazy. I thanked all the supporters for cheering for me."

Barber said pressure does not seem to phase Bey.

"It's just kind of crazy what he was doing," Barber said, noting Bey rewrote both the sophomore and varsity record books with the swim. "I would have set that as a four-year goal, not a first-year goal. He showed us just how talented he could be given the opportunity to swim fast."

Central finished with 117.5 points to capture runner-up honors behind state champion Stevenson's 167. It was the Red Devils' highest finish in five years, and the first time since the 1993-94 season that both the boys and girls programs earned state trophies in the same season. Sophomore Jeffrey Hou also set a new school record in the 200-yard IM with 1:51.43 (see full results on Page 37).

Senior Braxton Bokos helped the cause with a ninth-place finish in the 500-yard freestyle, Right behind him in 10th was sophomore teammate Nate Harris.

"The nice thing about our team is we have a lot of depth," remarked Bokos, saying the team felt confident heading into the meet after a strong sectional showing. "We felt like we were in a pretty good spot"

Shaving their body hair and reducing practice intensity - or tapering - to promote rest also imparts a feeling of optimal condition, he said. But there are no guarantees of making it the final heats

"On Friday you really have to put everything into (prelims) to make it to the final on Saturday," Bokos said.

He not only made it to the final for his last race as a Red Devils but broke his personal mark.

"I was pretty happy with my place, and I got four-second time drop from my personal best," he said.

He admitted to feeling nerves at his first state championship meet.

"The night before I just couldn't sleep. Prelims were probably the most nerve-wracking experience of my life," he said. "Once the meet started, I just zoned in and breathed in and hit all my dives and was just staying positive about my performance."

He praised the fans for energizing the competitors with their exhortations.

Furlong, Bokos and 200-yard medley relay member Sam Daw were the only seniors among the 12 team members on the state contingent.

Bokos said the team felt motivation to prove that its relatively young, unproven roster could rival anyone.

"Our goal ever since the beginning of the season was to prove the projections wrong," he said of the perceived underdog status. "Through my four years of swimming, I feel like this year was a lot different in the pool. We were trying to squeeze every ounce of energy out of each other." 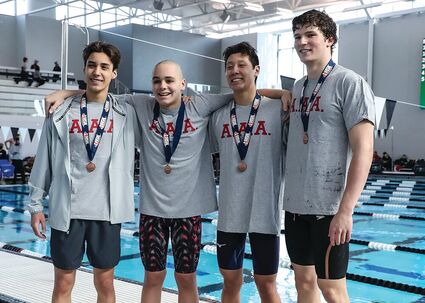 Samuel Daw, Joshua Bey, Jeffery Hou and Andrew Gilbert pose with their medals after finishing third in the 200-medley relay at state. The three Red Devil relay teams all finished in the top four, contributing 70 of the team's 117.5 total points.

Emotions were high afterwards knowing this chapter was over.

"It was the last time I'll see a lot of people. It was a bittersweet moment after putting all that time into the sport," Bokos said.

"I'm sad that I had to end my career. But I'm just as happy that I ended it lifting a trophy with my teammates," he said. "You create these relationships that you probably would never have had otherwise."

Furlong suggested the underclassmen may soon be in class by themselves.

"We have so many studs on our team, it's just absurd," he said,

Bey said he wanted to "set the bar pretty high for himself." The team expectation seems to be pretty lofty now, too.

"I think in the next few years we will definitely be wining state," he boldly predicted.

"You get pretty excited for the future," he said.