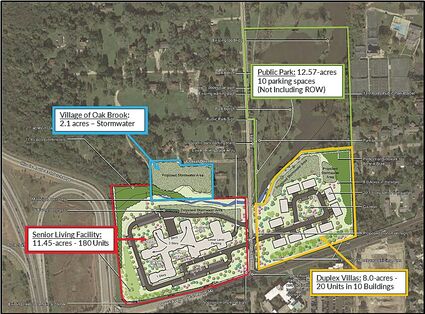 This site plan for Ryan Com-panies' latest proposal of a senior living development at Ogden and Adams shows the 180-unit building on the west side of Adams Street, the 10 duplex villas on the east side and the park land that would be dedicated to the village. (image provided)

Developer Ryan Companies has again downsized its proposal for a senior living project on roughly 32 acres in Hinsdale's northwest corner. But residents in the adjacent Fullersburg community contend the plan still poses a threat to their neighborhood.

The issue was on the agenda as a second read for possible referral to the plan commission, with the first reading back on July 13 when Ryan submitted a plan for a 285,000-square-foot, 225-unit assisted and independent living facility along Ogden Avenue west of Adams Street with elevations ranging from one to three stories, and 10 one-story villas housing 20 units on the east side of Adams. Ryan is requesting the primary parcel be rezoned from institutional to residential in order to construct a planned unit development.

Opposition from residents and direction from the board led Ryan to come back with a proposed 240,000-square-foot building with 180 units. The villas are unchanged for a total of 200 units. Ryan has also agreed to make the project contingent on state approval for dedicated left-turn lanes on both Adams and Ogden and proposed a 12-acre public park along the east side of Adams.

Village President Tom Cauley opened discussion on the issue recounting the efforts by him and other village officials to get Ryan and site owner Institute of Basic Life Principles to accept that the project could be no larger than 200 units and must include left turn lanes, based on an understanding of residents' concerns.

Cauley said the site could currently redeveloped by right in a less desirable way, generating more traffic if Ryan's project is rejected.

"(A developer) could build a three-and-a-half-story to four-story building that would be 125,000 square feet," he said. "My job is to bring to the community and the board what I think is the best possible development for a property.

"I do believe it's the best development opportunity for the village," Cauley underscored.

But homeowners raised concerns over flooding, sinking property values and an uptick in traffic through their community as reasons to object to the plan. Glendale Avenue resident Dan Hemmer said Ryan's request to change the site to residential is an abuse of the zoning code. If it's rezoned residential, he and others argued it should be to build single-family homes.

"(IBLP) should sell it as R-2, and R-2 is developing. In our town and neighboring towns, people are building homes," Hemmer said. "We're appealing once more to protect the code and the way it is and to stop (the) commercializing in our neighborhood."

"Some of the public benefits include improving Ogden Avenue/Adams Street, transferring 12 acres of scenic private property to the public for park use, improving the stormwater management and significantly increasing tax generating revenue (current owner pays zero) to the schools without burdening the schools with additional kids," Erickson stated. "Most importantly, it will provide the community a high-end housing choice in demand for our local seniors."

The trustees agreed to revisit the matter during a second read at the March 15 meeting. The proposal must go before the plan commission for a public hearing before any decision is made.