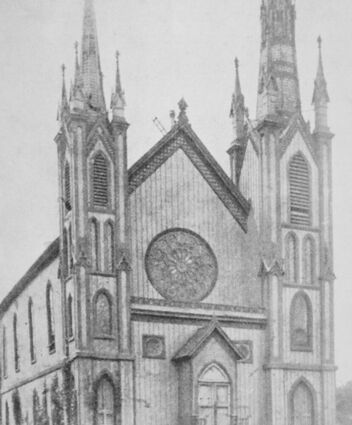 First church of Hinsdale - This photo in Sandy Williams' book, "Images of America - Hinsdale," shows Hinsdale's first church, built by a Baptist congregation. "The Baptists were the first to build their own church, constructed in 1870 on land donated by William Robbins. Located on the southwest corner of Garfield Avenue and First Street, the splendid building proved too costly. Attempts at sharing the space were not enough to sustain the congregation, and the Baptists disbanded. The building became a community meeting place known as the "Music Hall." The wooden structure burned to the ground July 4, 1895.