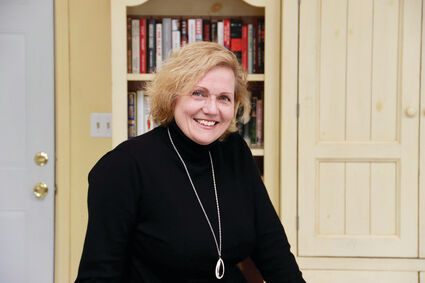 Sharon Sobotka's interest in theater work was affirmed by an unlikely source - her Loyola University counselor Sister Jean, now the most famous booster of Ramblers basketball. "She told me, 'You've got all your theater credit. You know, if you focus on business, you could become a stage manager,' " Sobotka recounted. (Jim Slonoff photo)

What does an assistant stage manager do?

Theater was Sharon Sobotka's passion from a young age, as she longed for moments in the limelight.

But a lack of roles while pursuing a performing arts degree at Loyola University flipped her script from acting to stage management.

"I wasn't on stage as much as I had hoped," Hinsdale's Sobotka related. "You need an army of people to do all the tech work. So I learned tech, and I loved it."

Those backstage skills will get a workout as she fills the role of assistant stage manager for "Women Playing Hamlet," opening at 8 tonight, March 3, at the Theatre of Western Springs (see page 26 for details).

Sobotka said the same abilities that helped her flourish professionally in corporate operations have application in the world of stagecraft.

"I can look at things and figure out the fastest way to get it done," she said.

Her exposure to running sound, lighting and stage directions in college equipped her with a multi-faceted understanding of a production.

"You have to pay attention to all the cues. You have to know what the blocking is. You have to know the lighting cues and what kind of lighting," Sobotka explained, adding that typically a pair of assistant stage managers are employed to man the left and right sides backstage. "You have to be very organized."

And invariably a knack for resourcefulness comes in handy.

"I found out I was very creative in that, when things were going wrong, how fast I could think of a solution," she remarked.

Sobotka joined TWS in 2003 and was given a part in the cast for its staging of "Cyrano de Bergerac." But it was not to be as she soon learned that her young family would be moving to Russia for her husband's work.

"God is telling me, again, 'You're not supposed to be on the mainstage,' " Sobotka exclaimed with a laugh.

Fortunately she found an outlet working with the theater at the international school in Moscow that her two children attended. After five years they relocated to Jakarta, Indonesia, where Sobotka joined the Jakarta Players. Founded as an ex-pat drama troupe in the 1970s, the group had evolved into a mix of both local and foreign members - though it never shed its nomadic status.

"We would perform everywhere because we were a community theater without a venue," Sobotka said. "I did stage managing as well as acting as well as producing."

She recounted putting on "12 Angry Jurors" and how it revealed cultural differences in responding to tense situations. Sobotka said her blunt style didn't always translate well where indirect communication is the norm.

"When I get backstage, I'm all business. It's like military precision because we're working magic," she said. "I'd have to explain my motive to them if I'm giving a harsh order."

Sobotka is excited for audiences to experience "Women Playing Hamlet" - even though she's technically never seen it.

"I'm back behind the stage," she said "As a stage manager, you're hoping somebody's taking a video so maybe you can see the whole thing after the show's over."