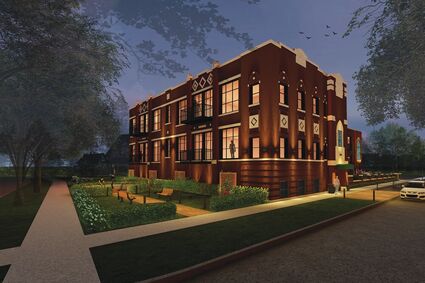 A Clarendon Hills company wants to convert the old Zion school building on Vine Street, built in 1931 with a major addition in 1961, into condos. The stone details, masonry work and two-story stained glass window would be preserved. "It really has a lot of details you're just not going to find any more," said Chris Walsh, principal architect of Tandem Inc. (rendering provided by Tandem Inc.)

The old Zion Lutheran School will be converted to condos if the Hinsdale Plan Commission and Hinsdale Village Board approve the proposal.

Mitchell said he first began thinking about the building after District 181 considered it as administrative office space.

"I thought, 'What could be there? I just don't want to see two single-family home lots,' " he said.

"There are so many empty-nesters that are looking for product like this," he said.

The concept plans calls for two three-bedroom units and 10 two-bedroom units with underground parking and an elevator. Outdoor amenities on the .61-acre site include a courtyard area for residents and a pocket park open to the public. Twenty-two parking spaces would be available in the underground garage. The units, which would range from about 1,200 to 1,600 square feet, likely would sell for $600,000 to $900,000, Mitchell said.

Trustees seemed receptive to the plan.

"I believe there is huge demand for this type of project," Trustee Luke Stifflear said.

Village President Tom Cauley said he didn't see any issues with density, parking or height, but added he would want the village to approve the homeowners association agreement and indicated the units should be age-restricted, not age-targeted.

Holladay will need a text amendment and special-use permit to allow lifestyle housing units in the 0-1 district and a major adjustment to the Zion Lutheran Church planned unit development to pull the site from that PUD, along with approval of a detailed plan and rezoning of the parcel from IB institutional buildings to O-1 office.

"We are patient and willing to spend the time to get a project right," Mitchell said.