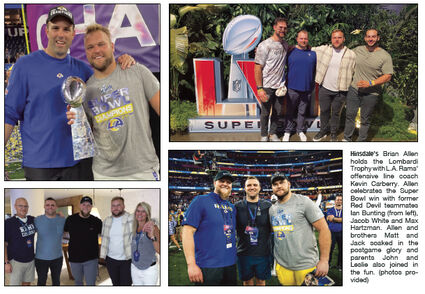 Hinsdale's Brian Allen said that truth still seems surreal even days after the Los Angeles Rams' starting center and his teammates earned the title Sunday with a 23-20 win over the Cincinnati Bengals at SoFi Stadium in Inglewood, Calif.

"It still hasn't sunk in yet. I'm kind of just in a disbelief," Allen said Wednesday morning as he readied for the victory parade through the city's downtown.

The outcome was in question until the closing minutes, when Rams quarterback Matthew Stafford led the offense on a 15-play drive culminating in a go-ahead touchdown pass to star receiver Cooper Kupp

"I'm thankful we were giving Matt enough time to throw the ball," Allen remarked. "One thing kind of led to another. It ended up working out."

The defense then did its part, thwarting the Bengals' ensuing drive. The Lombardi Trophy would stay in Southern California.

"We would have preferred for it not to be as close," John quipped, referencing a missed extra point earlier in the game that became more significant as time wore on.

Leslie admitted to a superstitious streak, feeling that losing the coin toss was a good sign, and then compelling the group to switch seats when the Rams' fortunes were slumping.

It was Allen's second Super Bowl as a Ram. He was a rookie backup three years ago when the team lost 13-3 to the New England Patriots. This time around was sweeter for so many reasons.

"I didn't really play too much in the first one," he related, saying he had to fight some pregame butterflies. "I definitely had to tell myself that I have to calm down."

Having the Rams' home stadium serve as the host venue was convenient, although that can also make it harder to focus, Allen noted.

"It was kind of just going through a normal week at home, but with a little bit more media coverage," he said with understatement.

Friend and fellow Hinsdale Central class of 2014 mate Jacob White was all in when Allen let him know a week before the game that he had a ticket with his name on it. The experience, he said, was gripping.

"The last five minutes or so of the game, it could have gone either way for sure," said White, an assistant football coach at Butler University.

When it finally went the Rams' way, the party was on.

"We were going crazy," he said. "I saw the confetti flying around, and my jaw dropped for like 20 straight minutes just staring at the field."

John Allen said the stress was all he could handle.

"I was exhausted from all the worrying. I felt like I could have slept at the stadium," he said.

Leslie was one proud mom.

And their victorious son's reaction once the game was in hand? He was tending to some self-care.

"I actually started cramping pretty good on the drive that we scored on," Allen related. "I was with the trainers trying to stop the cramping with ice and shots.

"Believe it or not I didn't even know we had won the game until they told me I had to go back out to take a knee (and run out the clock)," he continued.

Nothing like the biggest win of one's career to help the healing process. Allen said he made sure to keep hydrating at the post-game celebrations.

The Michigan State University alum became the starting center for 2019 campaign only to suffer a season-ending knee injury in Week 10. His ability to return to the physical level required in the NFL was uncertain. White was not surprised at Allen's restorative power, knowing the depth of his commitment and resilience.

"He deserves all the success that comes his way," he said. "He prepares at an elite level. It's no secret why he's successful as a football player. I was just happy to be part of his day and be there to support him." 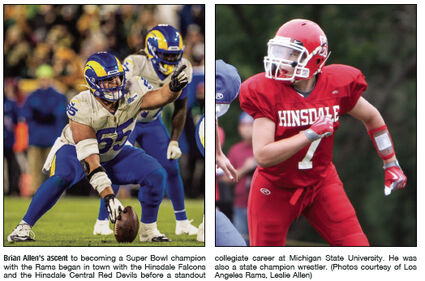 Brian Allen's ascent to becoming a Super Bowl champion with the Rams began in town with the Hinsdale Falcons and the Hinsdale Central Red Devils before a standout collegiate career at Michigan State University. He was also a state champion wrestler. (Photos courtesy of Los Angeles Rams, Leslie Allen)

Leslie expressed gratitude for the coaches and teammates that have come alongside her son throughout his development.

"I've very thankful for all those that have had an impact on his life," she said.

That would include Rams' offensive lineman Andrew Whitworth, this year's Walter Payton Man of the Year winner, who opened his home to his young transplanted teammate.

"He has a workout facility at his house (that Brian has used), and he'll even have him over for Easter or Christmas," Leslie related.

"He's a great guy, just really easy to work with," he said. "Just the wisdom he's gained over his career is invaluable. He gets everyone in the right spots and runs the audible really savvy.

"We definitely couldn't have done it without him," Allen added.

Entering free agency, Allen's future path isn't mapped out. But he'll soon have a new ring to mark one unforgettable point in his journey.