Tensions high at D86 board meeting 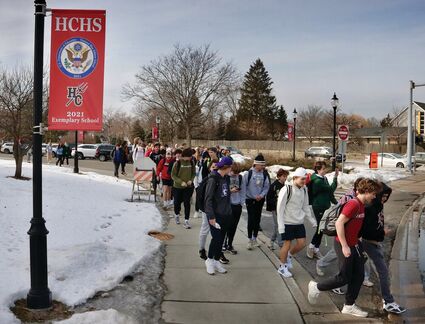 Some 100 Hinsdale Central students walked out of 10th period Tuesday afternoon in protest of the continued requirement to wear masks in school. The group gathered with parents in the parking lot of the administrative building across Grant Street from the high school. (Jim Slonoff photo)

Some three dozen speakers offered about 2 1/2 hours of public comment during the Feb. 10 Hinsdale High School District 86 Board meeting at which board members voted 5-2 to continue the COVID-19 mitigations approved in August.

Many speakers offered impassioned pleas for the board to lift the mask mandate, including several Hinsdale Central students.

"We are exhausted from being manipulated and exploited into wearing masks," Central student Sydney Pjesky said. "It's time to support the students."

Many residents criticized Superintendent Tammy Prentiss for not having a plan in place in the event a decision was made in the lawsuit challenging the state's school mask mandate. The court issued a temporary restraining order against the mandate Feb. 4. District 86 lawyers interpreted the ruling as applying only to the individual plaintiffs in the case.

"This type of chaos doesn't happen to this degree at well-run school districts," Susan Owens said, adding that the overarching problem is not about masks, racism, grading, math or science sequences, but about poor leadership.

"We need a trusted and experienced leader to help us do so," she continued. "Enough is enough."

"If you wonder why there was public unrest, look in the mirror," he said.

Several speakers cited emails obtained through a Freedom of Information Act request that shows Prentiss added two lines to a withdrawal letter from Valda Valbrun, who was being considered for hire as the district's diversity and equity consultant. Prentiss maintains she added the language at Valbrun's request.

Board members had their own testy exchanges, with Jeff Waters calling on Kathleen Hirsman to refrain from voting on the mask mandate because she doesn't have kids in the district.

When the board did vote, Waters and Peggy James voted to make masks optional. Hirsman, Cynthia Hanson, Erik Held, Debbie Levinthal and Terri Walker voted to maintain the mitigation strategies the board approved in August, including masks.

After adjourning for a closed session discussion, board members took their seats and spoke with a different tone.

James said the requirement that four members must agree before a discussion topic can be added to a future meeting agenda is creating division.

"I believe we can do better," she said, going on record that she will approve any board member's request for a future agenda item.

"I believe that we as a collective group have the duty to listen to each other," James said. "If you feel it's worth discussing a subject, that is good enough for me."

Board member Debbie Levinthal apologized for the lack of a public meeting following the judge's issuance of the TRO. She and Waters indicated they both had requested an emergency meeting after the ruling was handed down. That would have given the board the opportunity to better support building administration, students, staff and teachers, she said, noting she was trained as a teacher.

"You don't take a class on how to navigate a day like Monday," she said.

Levinthal also echoed one student's call for adults to learn to agree to disagree.

"Hearing all sides of this and being respectful in our discourse is something we as a board have to model and hopefully can bring this community together on many, many issues," she said.

Reid McCollum reiterated comments he made earlier in the meeting, suggesting outside interest groups who do not support taxpayer-funded education are taking advantage of the mask debate to divide the community.

"We're not making good progress by making unfounded accusations, really, really hurtful personal attacks, conspiratorial thinking," he continued. "And there is a huge amount of disinformation that is being weaponized in this community against the public schools that we all deeply and earnestly care about."

McCollum called for residents to focus on de-escalating the animosity during this time of upheaval.

"We need to heal our community and we need to somehow find a way to put the genie back in the bottle and prioritize our schools," he said.

Following a vote by the Joint Committee on Administrative Rules Tuesday, there is no state mandate on masking or other measures for public or private K-12 schools, at lest for the time being.

The committee voted 9-0 to object to the latest version of COVID-19 mitigations for public schools, saying in part that those rules are still being litigated in a state appellate court.

However, a Sangamon County judge last week issued a temporary restraining order halting enforcement of those September rules in the 170 school districts that were parties in the lawsuit.

Those rules included requirements for face coverings in school buildings, vaccination or testing for employees and quarantines for “close contacts” of individuals who had a confirmed or probable case of COVID-19.

That case is now on appeal in the 4th District Court of Appeals.