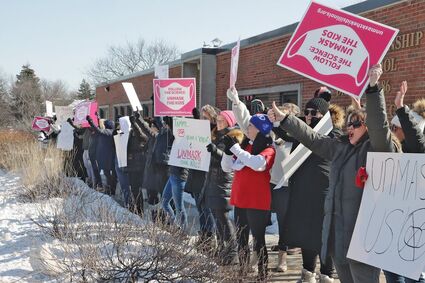 Upset parents gathered outside the District 86 office Tuesday afternoon (above) saying no student should be required to wear a mask. Another protest is set to take place at 5:30 tonight at Hinsdale South before the school board meeting.

As Hinsdale High School District 86 Board members plan to discuss COVID-19 mitigations at tonight's meeting, parents are upset with the way district leaders have responded to a court's temporary restraining order invalidating the mask and vaccine mandates for public schools.

Parents and staff received an email Sunday from Superintendent Tammy Prentiss and board President Terri Walker in response to Sangamon County Judge Raylene Grischow's decision on the suit, which names some 170 districts, including D86.

"(B)ased on the district's local authority under state law, we will continue to require students and staff to wear masks while at work and school, exclude students and staff who are deemed 'close contacts' in coordination with the local health department, and require employees to either provide proof they are fully vaccinated against COVID-19 or participate in weekly testing consistent with our 2021-22 opening school plan that was adopted on Aug. 12, 2021, pending further discussion at the committee of the whole meeting on Feb. 10, 2022," the email stated.

"With that said, we are also abiding by the temporary restraining order issued in the case that allows for the specific parties involved in the lawsuit to decide whether they want to wear a mask at school," she wrote.

Parents protesting outside the District 86 administration building Tuesday afternoon said the ruling should apply to all students, not just the ones whose parents joined the lawsuit. Among the group was Michelle Ptak, one of the plaintiffs in the lawsuit whose daughter attends Central.

Ptak discussed her confrontation with Central Principal Bill Walsh Monday in the lobby of the school on behalf of her daughter's boyfriend, Finn.

The three-minute exchange was captured on a video that was circulated on social media. Ptak said Walsh had no answers for her.

"He basically took away a child's due process," she said. "You can't quarantine a kid without a court order."

Megan Renehan, Finn's mom, said she attended the protest for her son.

"To me it makes more sense to try (mask) optional, see what that looks like," she said. "It's been two years for these kids and far too many have been negatively impacted."

Ptak also questioned how the district determined its response to the judge's ruling, as there was never a discussion or vote at an open board meeting.

The decision was based on the advice of the district's legal counsel, said Chris Jasculca, communications director for the district.

Grischow's ruling, issued late Friday, was not discussed when the board met in closed session that same afternoon, he said. That meeting was held to discuss the appointment, employment, compensation, discipline, performance or dismissal of employees. The exemption from the Illinois Open Meetings Act was cited when the board voted to go into closed session.

At one point the protesters began a unified chant calling for the board to replace Prentiss.

"Our superintendent is not following the TRO," one mom said.

"We're just upset," another mom said. "We want our kids to be happy. It's very frustrating for them. It needs to end."

Varying reports have been circulating regarding the treatment of students who refused to wear a mask at school.

Jasculca said about 10 students came to school Monday morning and chose not to follow mitigations. Those students were sent to the auditorium for asynchronous learning. The number grew during the day, he indicated.

Some parents at the protest complained that students who refused to wear masks were sent to the school's basement. Jasculca confirmed some students who were not masked were sent to a classroom in the basement; others were isolated in a conference room on the second floor. Students also have the option of being excused from school for the remainder of the day or putting on a mask and retuning to class, he noted.

One mom who did not want to be named said her son was in the auditorium - but not because he didn't want to wear a mask.

"The kids basically sat there and goofed off because they wanted to get out of class," she wrote in an email. "It was a joke."

Mask mandate to be lifted Feb. 28

In less than three weeks, the state’s indoor mask mandate will be lifted, Gov. JB Pritzker announced at a Wednesday afternoon press conference.

But that Monday, Feb. 28, change will not effect the state’s public schools, he said, where vaccination rates are lower and students can’t always maintain safe distances.

“The equation for schools just looks different right now than it does for the general population,” he said. “Schools just need more time.”

He said masks have worked and his goal is to avoid adaptive pauses and remote learning.

“In the coming weeks it’s my hope and expectation we will continue making progress to a point where we can remove school mask requirements and keep kids in schools,” he said.

Masks still will be required in some locations, Pritzker noted. He and Dr. Ngozi Ezike, director of the Illinois Department of public Health, and Dr. Emily Landon, executive medical director, infection prevention and control at UChicago medicine, warned the COVID-19 pandemic is not over.

“To be clear, COVID is not gone and it won’t be gone on Feb. 28, so we’re going to continue to find ways to live with the virus,” Ezike said.

All three also encouraged anyone eligible to get a vaccine or booster shot.