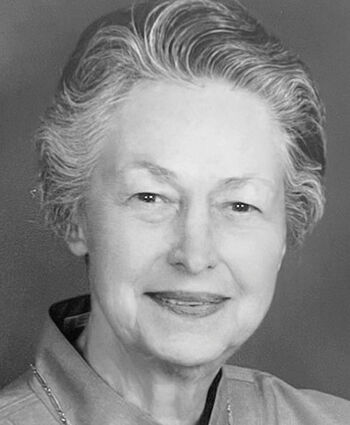 She was born in 1928 in New Britain, Conn., to Carolyn Low Jackson and Leonard (Buck) Marl Jackson.

Audrey devoted her active life to family and community. As a teenager during World War II, she volunteered for spotting planes, preparing bandages and attending to wounded veterans. Following graduation from New Britain High School, she attended Edgewood College, New York, before moving to New York City in 1949 to work in radio production at WMGM.

In 1950, she moved to Chicago and began a lifelong career as a counselor and broker for life and health insurance. In 1952, she discovered a passion for political engagement, serving as a volunteer during presidential primaries and maintaining a strong political awareness throughout her life.

In 1954, she met the love of her life, Arthur F. Muschler. Together they created a loving home in Yorkshire Woods, Oak Brook. There they raised three sons, George, James and John, passing to them a love of family, education, community service, history and travel.

In the 1970s Audrey became a leading advocate for preservation of land and historic buildings in DuPage County. She co-founded the Oak Brook Historical Society and the Fullersburg Historical Foundation, and served as the first president of both. She co-founded the Salt Creek Greenway Association. She played a leading role in the preservation of the Mayslake Peabody Estate in Oak Brook; she secured its recognition in the National Registry of Historic Places and co-directed the successful voter referendum for purchase of the estate by the DuPage County Forest Preserve, saving the estate from destruction. Audrey went further to co-found the Mayslake Landmark Conservancy and championed the Peabody Estate's historic preservation and public use.

Audrey was also instrumental in the preservation of the historic Ben Fuller House in Hinsdale and co-authored the successful nomination of the Old Butler School to the National Registry of Historic Places.

Audrey was a frequent reporter on community affairs for The Oak Brook Doings. She promoted archaeological surveys in DuPage County, documenting native settlements, some dating to 3000 BC, and published many articles on DuPage County pre-history and history. She also co-authored a concise local history book entitled "Oak Brook."

With Arthur, Audrey shared a wide cherished community in the 10th Mountain Division Association devoted to fellowship, remembrance, peace and reconciliation. They were active members of Grace Episcopal Church in Hinsdale. Audrey was an active member of PEO International, promoting women's education and advancement.

Audrey was preceded in death by her husband, Arthur, in 2002.

A memorial service will take place at Grace Episcopal Church at a date yet to be determined.

Memorials may be made online to the PEO Foundation Educational Loan Fund (JU/IL chapter) at https://donations.peointernational.org/peo-donation-elf.