In college, Messana learns her birth parents have married and she has two full siblings 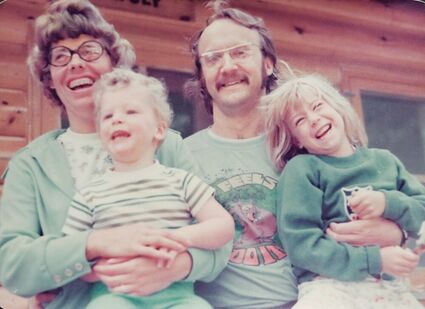 Alisa Messana - who grew up with her adoptive parents, Char and Dick, and her adopted brother, Rick - was contacted by her birth parents when she was in college. "I don't think it's something that would have come up for me again personally until I had children," she said. "I felt good in my family that I grew up in, even though our family had our ups and downs. I felt loved. I was never made to feel out of place." (photo provided)

When Alisa Messana was a sophomore at Elmhurst College, she got a call she never expected to receive.

The woman on the phone identified herself as a volunteer for Truth Seekers in Adoption and asked Alisa her full name and to confirm that she was born Jan. 2 at Swedish Covenant Hospital.

"She proceeded to tell me my birth parents had married, had two other children of their own and were interested in having a relationship with me if I was interested," Messana said.

Messana asked if she could call her back.

"I said to her, 'You know what? I have midterms tomorrow and I can't really do this right now because I have to study,' " she recalled. "I wanted to buy myself some time because I'm somebody who likes to be able to process things before I have a reaction."

Hinsdale's Messana had known of her adoption since she was 3 1/2 years old. Her parents, Dick and Char Lillquist, bought her a cute illustrated children's book that offered a simple explanation of the process and talked about how much adopted children are loved, including her younger brother, Rick.

"It helped me understand why my mother wasn't pregnant before he just showed up in the car seat," she said. "I don't remember thinking much about it again, being adopted. It wasn't a big thing in our family."

Messana took her midterms and went home to talk to her adoptive parents. She could tell her parents were a little unsettled, but they didn't discourage her. She began with an exchange of letters and photos with her birth parents, Linda and Richard Kosarek. The first correspondence provided some insight into their personalities.

"My birth father's was one page. My birth mother's was probably 20 pages front and back," Messana said.

Eventually she received photos of her siblings, Kelli and Bryan, then ages 11 and 8.

"When I got those photos, there was no question we were related," Messana said. "I can remember spending like an hour just staring at those photos over and over again. That was mind-blowing for me."

Her relationship with her sister and brother began through letters as well.

"We were like little pen pals for a while," she said.

Eventually the decision was made to meet in person. Messana, navigating the route from Villa Park to Arlington Heights without the benefit of GPS, got lost and called Linda on a pay phone. Messana had been given incorrect directions.

"She was so flustered," Messana said.

Messana was nervous as well.

"I remember going up and knocking on the door and my heart was racing. I really hardly slept the night before," she said.

At that first meeting, Messana learned Linda was 19 when she and Richard got pregnant. Linda planned to keep the baby, but just weeks before she was to deliver, her abusive stepfather kicked her out of the house. Richard, then 24, wasn't ready for marriage, and Linda said she knew she couldn't raise a child on her own.

"She had a lot of unresolved feelings. She still felt like she did the right thing, but she had a super lot of grief around it," Messana said.

Not long after Messana was adopted, Linda and Richard reunited.

"You can imagine how painful that had to be, especially for her," Messana said. "I think of how different their lives would have been. I might not have had my brother and sister. It could have played out so many different ways. I do often think of what my life would have been like if I had grown up with them."

Linda, too, had spent years thinking about how her baby girl's life had turned out. She yearned to find her daughter after her best friend died and she learned about Truth Seekers in Adoption from a TV program.

"I never stopped mourning or worrying," Linda said. "Her birthday is Jan. 2. Every New Year's I'd be in the bedroom crying. Then when my friend passed away, I thought, 'What if something happens and I die?' I didn't want to pass away not knowing if she had a good life."

Once she began working with Truth Seekers, a new concern arose.

"It was exhausting mentally - the waiting and hoping she wouldn't reject me," Linda said. "I didn't want her to be angry because we ended up getting married a couple of years later."

Meeting Alisa and being Grandma Linda to her children has been wonderful, Linda said.

"I'm not bitter anymore," she said. "Things happen for a reason. I'm not a religious fanatic, but I believe that God took her so she could have the life she had and her parents were supposed to be her parents."

She is thrilled all three of her children get along and loves hearing Alisa laugh when she's with her brother Bryan.

"I am so happy they all get along," Linda said. "It's just perfect. I couldn't ask for anything more."

Shortly after Messana met her birth parents, her adoptive parents split and eventually divorced. That added another layer of complexity to the situation, she

But other than one difficult day when her adoptive mom told her not to go visit her birth parents, the blending of the two families was relatively smooth.

"My parents and my birth parents were always both very respectful of each other and the process that I went through, and because of that it made my process easier," she said. "They were able to put my needs before theirs, which I appreciated - which is not always the case."

And Messana worked to make sure her adoptive parents weren't sidelined.

The two sets of parents eventually established their own relationship. Messana remembers the first time the four adults went out to dinner together.

"I would have loved to have been a fly on the wall at that one," she said.

Uncomfortable moments inevitably arose over the years at milestone events, when graduation tickets were limited or the wedding photographer wanted a portrait of Messana with her parents. And the reunion created some struggles for Messana's brother, Rick, who has never searched for his birth parents.

But Linda and Richard extended their care to Messana's mom, Char, inviting her to family gatherings and then visiting her while she lived at The Birches for four years before passing away in December 2020. They would even take her out to lunch when Messana and her husband, Frank, were out of town.

"We had a nice relationship with her mom," Linda said. "I never wanted her mom to feel left out."

Messana's father, 82, lives in an apartment in Oak Park.

A social worker, Messana said it's interesting to watch the dynamics in her rather unique family. 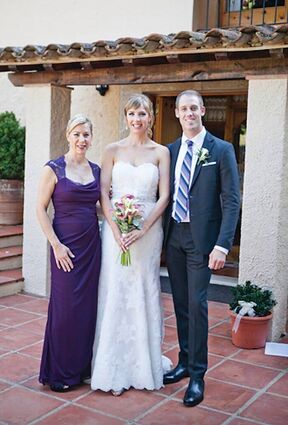 After Messana's birth parents married, they had two more children, Kelli and Bryan. Messana was a bridesmaid when Kelli got married in Barcelona in 2013. Although many people said she looked like her adoptive father while she was growing up, the resemblance she shares with her siblings and her birth parents, Linda and Richard Kosarek, is evident in these photos. (Jim Slonoff photo, photo provided)

"I've had a lot of time, and it's interesting to see the way the relationships have evolved," she said. "Picking out the greeting cards is really difficult. I always have to go to the 'someone special' category."

And there are no easy labels to assign to the role Linda and Richard play in her life.

Messana remembers when her daughter Ariana was in second grade and had to complete a project on her family history. Ariana found a simple but accurate way to describe the situation.

"Grandma Linda and Grandpa Rich had my mom and Grandma and Gramps raised her and they all love my mom," she wrote.

That love has made her family fuller, Messana said. And knowing her birth parents has given her a different perspective on aspects of her own personality, she said, noting Linda is a very demonstrative Italian.

"My parents always wondered why I was such a drama queen as a teenager," she said with a laugh. "Now I know where it came from."