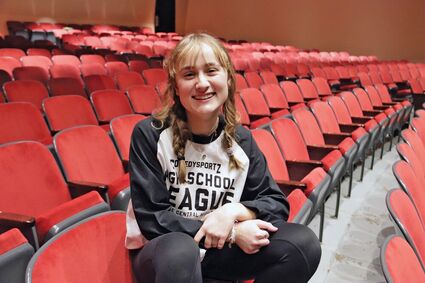 Hayley Cashman said doing improv has opened her mind to the multiple paths a scene can take based on each person's contributions. "It's a cool creative exercise," she said. "It allows for a lot of possibilities." (Jim Slonoff photo)

What have you learned about performing improv?

Improv actors have to be quick on their feet and possess at least a working knowledge across a broad range of topics.

But occasionally they're stumped, like Hinsdale Central junior Hayley Cashman was while rehearsing for the school's ComedySportz Improv Show that runs tonight through Feb. 5 (see Page 18 for details).

For another game, she mistakenly pantomined Olympic curling as a weightlifting event. But it's comedy, after all.

"When you do something confidently and it's wrong, it ends up being really funny," Cashman said. 'Whatever you think it is, you've just got to go with it."

"Someone who works at ComedySportz professionally sort of helps us with our rehearsals and emcees the show," she related.

The actors are split into teams, who compete through a series of different games. The material to animate those games is solicited from the audience by their shouted responses to questions like, "How did you get here today?" or "What's your favorite movie?"

"We can take that (suggestion) in any direction we want," she said. "And then whatever you partner says, you build the entire scene off that."

As a veteran of traditional theater productions, Cashman said doing away with weeks of memorizing lines and blocking assignments for an unscripted improve show felt like culture shock.

"It's a bit of a jarring experience," she remarked.

But she's come to appreciate the natural expression it promotes.

"It's surprisingly not as hard as I thought it would be because you just use your creative mind, and whatever you come up with, you just say and make it work," she said. "You can't really do anything wrong."

Students in the troupe were instructed to bone up on current events to ensure topical and timely elements are incorporated. They are also strongly encouraged to employ over-the-top physicality in their performance.

"You pretend like it's normal and take it seriously, and it's really funny," Cashman said.

She serves as a leader among the cast, running warm-up exercises and keeping her peers on task

"Especially with this many people - I think there are 18 of us - it's really easy to get off track," she remarked.

"Since I've been on the stage her before, I know the ropes," Cashman continued. "Especially with a show like this, because there's no script, it's a little more nerve-wracking. Because I've done a show before, it sort of makes me more comfortable. I can help people out who don't know what it's like."

And one of the cardinal rules of improv: if you slip up, embrace it.

"Calling attention to the mistake is always much, much worse than actually making the mistake," Cashman said. "No matter how you get there, laughter is the main goal."