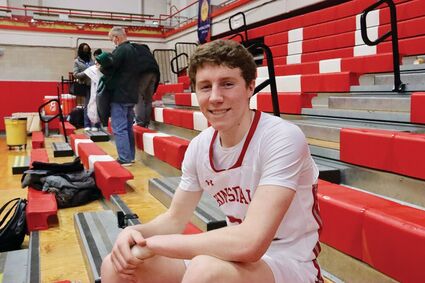 How's the season been going?

It's going great. It's been a lot of fun. It's good being back.

The first time I even played basketball was the Jodie Harrison league when I was in elementary school. I think of playing with grandpa because he was always my coach, and playing with my brother Mac.

What do you enjoy about it?

I love the way that, individually, you can work and get better at the sport, and all you really need is a ball and a hoop - you don't really even need a hoop. And also being able to go out on the court with my team and win games.

How have you evolved as a player?

I think that I've gotten a lot stronger. I've learned a lot more about the game and developed my basketball IQ.

As a guard with size, do you take advantage of that?

Absolutely. If the other team puts a smaller guard on me, I can take them in the post. If they put a larger player on me, I can go around them. Coach is great about finding those mismatches and creating isolation plays. I can guard almost all the positions.

What are your goals for the season?

I wrote them in a notebook before the season. One is to pass my uncle Kevin's season scoring record. I have three uncles that went to Central and played basketball. My team goal is to win conference.

Do you have a pre-game routine?

I always have to take a shower, brush my teeth and prepare like I'm going out for a nice dinner.

I've committed to play at the University of Wisconsin-Whitewater.

Is it special playing for the Red Devils?

It's an honor. Ever since I was a little kid, it's been a dream of mine to represent Hinsdale and play for the Red Devils.

Why does coach Nick Latorre like having Quast on the squad?

Jake Quast has been a tremendous teammate and great role model for the past four years. He has a great work ethic, is a great leader and always puts the team's needs above his own.