The Herd offers boys and girls of all skill levels the chance to learn, play lacrosse 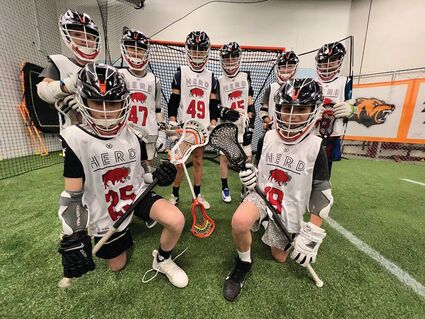 After successful summer and fall programs, The Herd youth lacrosse program is accepting registration for its spring session at Veeck Park. "It's really, really great to have a community-based program in Hinsdale," Dan Applebaum said. "There's been a big need for it, just to provide opportunities for players to get lacrosse programming year-round." (photo provided)

Growing up in New Jersey, Jay Moody started playing lacrosse before he was in kindergarten.

"I was always an East Coast guy before I was transferred out here to Chicago," the Hinsdale resident said. "I thought lacrosse was going to be bigger out here than it was."

The father of three boys was disappointed that the only acknowledgment he saw of his favorite sport were signs saying, "No throwing lacrosse balls" at the elementary schools.

So Moody, a former Brown University lacrosse player, was excited when he learned Hinsdale would have a new community-based program called Herd Lacrosse. It was launched last year by Dan Applebaum of East Ave Lacrosse.

"Dan has proved to be awesome with all the kids," Moody said. "He knows every kid's name. He keeps the practices fun."

Applebaum, who is the head varsity lacrosse coach at Fenwick High School, co-founded East Ave Lacrosse, which has offered travel and community-based teams and clinics in other towns since October 2015.

"Throughout the years, we've had a handful of players from Hinsdale play with us," Applebaum said. "A handful of the parents that were already involved in our programs were like, 'There isn't a local option for Hinsdale residents.' "

One thing led to another and soon Applebaum was talking to The Community House and the Hinsdale Parks and Recreation Department about renting fields to run a summer camp in 2021. Conversations evolved and soon Applebaum agreed to start a community lacrosse program here.

Interest in the summer camp was good, he said, with 30 to 40 players signing up.

"For a first year of summer camp in an area we have never really operated in before was awesome," he said.

The fall program drew about 50 kids, who practiced once a week and played a scrimmage or pickup game on the weekend.

The program now is recruiting participants for its spring programs at Veeck Park, which are open to boys and girls ages 6 to 14.

"Our spring program doesn't start until April, but we already have 30 players signed up, which is really, really exciting," Applebaum said.

Athletes at any level of play are welcome, he noted.

"We have kids that can play on a national level and then we have first-time players that are picking up a stick for the first time. I think there's a huge benefit to that - for new players to see a peer playing at a really high level."

Peter Trunk, who played Division I lacrosse at Rutgers University before transferring to Illinois Wesleyan University and playing and then coaching there, will be the lead coach. Some parents who played will be helping out as well, including Hinsdale's Terry Walsh. He grew up in town and played lacrosse at Central.

His two sons, Reagan, 14, and Bennett, 12, both play as well. Lacrosse sticks were always around the house, Walsh said, but the boys played baseball for several years before they really got into lacrosse. Walsh has known Applebaum since his boys started playing with East Ave three years ago.

"I'm just excited that Hinsdale will have a program for kids, a viable option," he said. "The most important thing is that Dan will offer learn-to-play opportunities year-round. He's going to be around for a long time."

Walsh, who played in men's leagues in college at Loyola, will be one of the coaches this spring. He said he appreciates the opportunity for kids who might not be ready or interested in club lacrosse to learn about the sport.

"I equate it to Little League, where you have some kids that play a lot, some kids are just learning to play, but it's all about learning to play and creating new friendships and it's a lot of fun, so that's what I'm excited about," Walsh said.

Applebaum said his goal is simple.

"That I think builds a desire to want to keep playing. If a kid loves playing something, they are going to want to keep doing it and the more you do it, the better you get at it."

Applebaum believes the sport has a lot to offer, whether athletes hope to pursue it in the most competitive arenas or are looking for something to compliment their primary sport.

"The skills and concepts translate to just about every other sport," Applebaum said. "Whether you play football or basketball or baseball or hockey, there are things you are doing in lacrosse that will make you a better athlete in any other sport as well."

Moody agrees that is part of lacrosse's appeal.

"It takes so many great aspects of other sports," Moody said. "It's similar to basketball on offense. It's got a lot of running to it. It's got the roughness of football. It's got so many facets from so many other popular sports, I don't see how it can't take off." 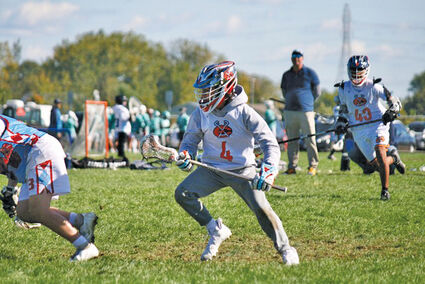 Reagan Walsh, an eighth-grader at Hinsdale Middle School, plays for East Ave Lacrosse, the travel program co-founded by Applebaum. Reagan's dad, Terry, who will be coaching a Herd team this spring, said he wishes Hinsdale had a program like this when Reagan and his brother, Bennett, who also play for East Ave, were younger. (photo courtesy of Terry Walsh)

"I'm very excited for him and the town," said Moody, whose oldest son, Graham, is signed up to play with the Herd this spring. "It's long overdue."

Applebaum said he's excited to see the incredible level at which young kids can play.

"Here's third- and fourth-graders that are doing things that I didn't do until I was a junior in college," he said. "It's really cool to see the level of skill that a lot of these kids are starting to develop at a really young age."

What's with the buffalo?

Jay Moody, an East Coast native, has loved lacrosse since he was a little kid. So he was happy to help Dan Applebaum of East Avenue Lacrosse bring a community-based program to Hinsdale.

“When I met him, right away, I knew this is a guy we can rally around,” he said.

And when the program needed a name and logo, he was happy to help with that, too. He wanted to find a name with alliteration and didn’t have to look far. His high school football team was named the Herd.

The name served as an acronym for young athletes, with the “h” standing for hustle, the “e” for enthusiasm, the “r” for roughness and the “d” for desire.

“We all know what those letters mean, everyone who played football,” Moody said.

Married to a native of Buffalo, N.Y., Moody chose to feature that animal in the logo. He believes it resonates in a number of ways.

“It is very much a team sport,” he said. “One strong player isn’t going to win the game. You have to have a lot of guys firing on all cylinders to win games.

“The stronger, bigger buffalo pull along the weaker, younger buffalo and teach them along the way,” he added. “I’m hoping that’s how this will play out.”

The animal also fits with the sport’s origins as a Native American game, he said.

“I felt the buffalo was sort of an interesting icon for that,” Moody said.

Were it not for his confidence that Applebaum would create a quality program, he said he never would have suggested the name of a team that means so much to him. His high school football coach was like a second father, he said.

“This has to be an enduring program or it’s disrespectful to a guy I love,’ he added.

The former Brown University player is thrilled to see Hinsdale youth learn a sport that he has enjoyed his entire life.

“I’ve always loved this game and it’s been good to me,” he said.