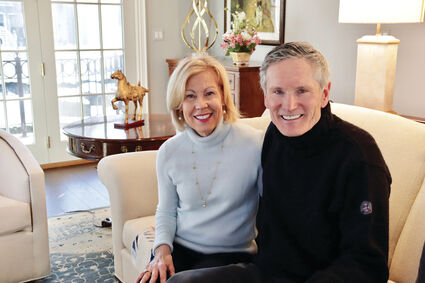 Inspired by a family member's health challenge, Patrick and Denise Dills of Hinsdale made a substantial gift to the Bleeding & Clotting Disorders Institute in Peoria last year, enabling the organization to expand its research capabilities with updated equipment and scholarships for physicians to advance understanding in the field. (Jim Slonoff photo)

Hemophilia and similar disorders are conditions in which a person's blood does not clot properly. Relatively rare, finding specialized clinics for treatment can be hard for the tens of thousands diagnosed with the disease.

That includes a close family member of Patrick Dills and his wife, Denise. So when the Hinsdale couple learned that the Bleeding & Clotting Disorders Institute of Peoria was in need of upgraded equipment and research funding, they responded.

"We got to know (the institute staff) and they really had some antiquated equipment they were using," Patrick said. "They were open to somebody helping them out."

Last year, through their Dills Family Foundation, they gave the institute a significant donation to take its operation to the next level.

"It was north of seven figures," Patrick said of the gift.

Hematologist Michael Tarantino, founder of BCDI, said the funding was a game changer.

"We're a small startup nonprofit organization," Tarantino said. "To have that level of donation even be offered was really incredible. I was humbled by it."

As the only federally recognized, nonprofit Hemophilia Treatment Center of Excellence in Illinois outside the Chicago area, Dills said it performs a crucial service for a broad area.

"BCDI serves a lot of patients from Chicagoland and the suburbs. We've been involved with it for the last number of years, and they really do an incredible job," he said.

The donation dovetailed with the opening of BCDI's new larger facility to accommodate the growing practice.

He recalled the initial phone conversation with Pat and Denise that set things in motion earlier in the year.

'They were so gracious and so interested in what we do," Tarantino related. "They wanted to bring that relationship to the next level."

They toured of the site while it was still under construction, and the Dills determined the project was well-aligned with the foundation's mission.

Dills, who has served at CEO and executive chairman of several companies in the health care industry, said the foundation focuses its philanthropic support in the areas of children, health care and education. The couple established a local DuPage PADS outreach in the early 2000s, endow a scholarship to their alma mater, the University of Pennsylvania Wharton School of Business, and provide funding for instructional staff at St. John of the Cross School in Western Springs.

"We're a small foundation, so we want to kind of dive deep with a few things that we're really interested in," Dills said.

Village residents since 1995, the couple has three children and eight grandkids living in either Hinsdale or Western Springs.

"We see them all the time. We feel incredibly lucky," he said.

With a blood analysis machine costing more than $300,000 and another device priced around $100,000, Tarantino said the funding will enable the institute to stay on the cutting edge of hematology research.

"It measures the blood clotting protein," he said of the equipment. "That's really going to help us take our research and lab program up to the next level."

Money will also be used to underwrite a summer scholarship program for budding hematology scientists to concentrate on clinical and translational research.

"It sort of parallels with plans we already have to expand the staff of our research department," Tarantino said. "This will help our community by helping the researchers understand their disorders better by looking at their respective cases."

Tarantino said the funding will also promote BCDI outreach into nine other cities across the state.

"We're able to provide care for as far north as Rockford and as far south as Carbondale, as well places like the Quad Cities, to serve underserved communities with specialized expertise," he said. "They really are in need of that kind of expertize and they are challenged to drive the 100 or more miles to our Peoria location.

"Without the donation, a lot of these efforts would have stalled or would have been a much harder task to accomplish," he added.

As the BCDI was readying for the grand opening of its new office, the Dills were suddenly the ones on the receiving end of an unexpected proposition. 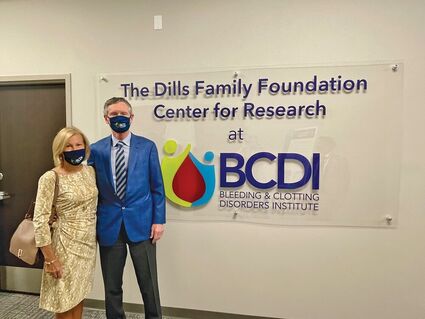 "They said, 'We want to name the (institute's) research center after you guys,' " Patrick related.

So along with the ribbon cutting for new institute in September, the Dills Family Foundation Research Center was also introduced to the public.

"It was a small expression of our appreciation that we named the research program in honor of the foundation and the Dills family," Tarantino said. "The gift has given us the ability to really serve our patients in supporting innovative research.

"We're to grateful that the foundation really recognized what we do," he continued. "It's been really a great relationship. Pat and Denise are the two nicest people. They are doers."