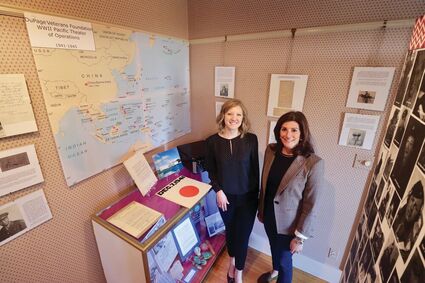 Former Hinsdale Historical Society Board members Anne Swenson (left) and Sue Rose worked on a new World War II exhibit for the Hinsdale History Museum that officially opened to the public Tuesday night. The exhibit focuses in part on the Pacific Theater of Operations during the war, and also includes photos of Hinsdaleans who served in the Armed Forces and artifacts from the war. (Jim Slonoff photos)

People around the county marked the 80th anniversary of the Japanese attack on Pearl Harbor Tuesday with ceremonies and observances.

The exhibit features photos of service men and women, various artifacts, maps and letters, and a list of Hinsdale residents known to have served in the war.

That list names 1,496 Hinsdale residents out of a total population of 7,836, a number that shocked historical society volunteer and Hinsdale Central senior Tyler Folkmann.

“That’s about a fifth of the population that ended up serving,” he said, noting that The Doings newspaper, which printed the names, indicated the list was not complete.

The initial idea for the exhibit followed a call from Hinsdale Middle School last spring asking if the society had any items it could display during World War II day. A look through the archives prompted a realization on the part of former board members and exhibit organizers Sue Rose and Anne Swenson.

“ ‘We’ve got a lot of Hinsdaleans we can celebrate for World War II. We should have our own exhibit,’ ” Rose recalls them thinking.

Swenson, whose grandfather served toward the end of the war, said she has always been interested in the topic.

“I thought it would be a fun thing to do, especially with Sue,” she said. “We had both rolled off the board in September.”

The two enlisted the help of Folkmann and Joe Craig, past commander of American Legion Post 250 in Hinsdale. Craig said he was pleased to have the opportunity to help — and to call attention to the war in the Pacific, which often is overlooked.

“They always focus on — and not to diminish anyone who died or suffered in Europe — they always focus on Normandy and the invasions of Europe,” said Craig, a retired Marine. “It was a totally different experience for them (in the Pacific) than the guys fighting in Europe, but no one ever really talks about it or focuses on it.”

Craig contributed a Japanese bayonet and Japanese rifle to the exhibit, along with a photo belonging to his late neighbor, Vince Petrovsky, of a temporary cemetery near where he served.

“He carried it all folded up in his wallet,” Craig said. “Everywhere he went, it was always with him, of the graves of the men he left behind.”

That portion of the exhibit is titled “The Hidden Cost of War.” Post-traumatic stress disorder wasn’t diagnosed in the 1940s, Craig noted.

“But these men who came back and lived apparently somewhat normal lives here carried a lot around under wraps that no one ever was able to see,” he said.

The exhibit also recognizes the efforts of those who remained at home during the war.

“We had one of the largest and most well-run canning facilities in this country,” Swenson said.

Victory gardens were another area in which Hinsdaleans excelled.

“We had the highest per-capita victory gardens in the country,” she said.

Rose noted the scrap metal collections that were conducted in town, with kids often collecting the material in empty fields and alleys.

“It was a communitywide effort to support the war, not only for the soldiers that went, but the people left behind,” she said.

Working on the exhibit generated a true sense of pride for its organizers.

“I think telling these stories, you can be proud of the community you live in,” Rose said. “There were some really heroic people who came from here and served and came back to their community. To tell those stories is important.” 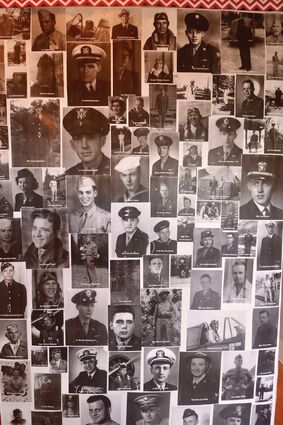 “There are thousands, if not tens of thousands, of people who had very heroic personal stories from the war, and there are lots of people from Hinsdale who have these heroic stories,” he said. “They achieved very amazing things, incredible things.

“It was just a reminder to me that normal people from my community can be the people who are affecting great change,” Folkmann added.

The exhibit is open from 10 a.m. to 2 p.m. Saturdays (except for Christmas and New Year’s Day) through May. Groups interested in arranging a tour should call (630) 789-2600 to schedule an appointment if Saturdays are not convenient.