Smith remembered as more than a CEO 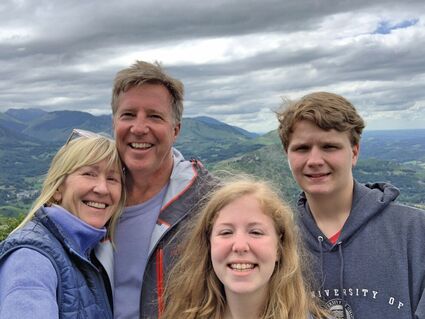 Joanne Smith traveled with husband Rory Repicky and kids Claire and Michael to Lourdes, France. A practicing Catholic, her faith deepened as she struggled with cancer, Rory said, and she made several pilgrimages to Lourdes. (photo provided)

Joanne Smith, president and CEO of Shirley Ryan AbilityLab, was a noted physician and the driving force behind the transformation of care delivery in the field of physical medicine and rehabilitation.

But her husband, Rory Repicky, said she still was very much the unassuming, fun-loving girl he met working in a hospital emergency room in Pontiac, Mich., while in college.

"Out here, she always went by Mrs. Repicky. Most people didn't even know she was a doc," he said.

She never allowed her impressive professional accomplishments to overshadow who she was a person, said the friends and family who are mourning her loss. She died Sept. 6, 2021, at age 60 after a six-year battle with cancer.

Joanne's focus was always on others, said Nancy Paridy, president and chief administrative officer of Shirley Ryan AbilityLab. The two met 27 years ago when they were young co-workers at what was then the Rehabilitation Institute of Chicago.

"We not only became wonderful colleagues, she was such an extraordinary person as a wife and mother and sister and friend. She was one of my dearest, dearest friends," Paridy said.

"Some presidents and CEOs would focus on themselves and their power, control," she added. "She was quite the opposite. She wanted every individual patient to get to their fullest ability."

Friends and neighbors said Joanne was an extremely generous and caring friend.

"I miss her every day, not because she was this superstar medical visionary, but because she was my girlfriend," Kelly Abate Kallas said. "I remember one year I bought her a dress for her birthday, and she couldn't get over the fact that I'd spent time searching for something she'd like, even though she did the exact same thing for so many others. She didn't know how wonderful she was."

Neighbor Mimi Bradley also was a good friend of Joanne's, a relationship strengthened by their sons' friendship since third grade.

"She was a really special person," Bradley said. "She had all the attributes that you would expect of a successful CEO - she was smart and a powerhouse and really diligent and hardworking, like nobody's business. She was a capital 'E' efficient.

"She also had a tremendous soft side to her, which made her really unusual. She would bend over backwards for you. She was extremely generous in terms of her time and her emotions." she added.

Rory and Joanne, who moved to Hinsdale in the late 1990s, often had large groups of kids at their house for pizza parties or Rory's ribs, Bradley said. Joanne hosted Halloween and Christmas cookie parties, too.

Maintaining that work-home balance became more difficult in 2010, when she began designing the new Shirley Ryan AbilityLab. Rory decided to step back from his job in financial services to stay home with Claire, who is now 21, and Michael, who is now 18. Long before that, he and Joanne had a very egalitarian approach to their marriage.

"Joanne and I saw everything on an even level, her work, my work," Repicky said. "I was as enthusiastic a supporter of her work as she was of mine. We worked together on a lot of stuff."

No matter what Joanne was working on, patients always came first, Rory said. He recalled one of her first patients, a woman named Gwen who had had a stroke while giving birth.

"Joanne connected with Gwen and Gwen's family and continued to connect with all of her patients, well beyond the patient-doctor relationship," Rory said. "That's the one thing with Joanne. It was always about the patient and never about her."

Joanne became a patient herself after doctors discovered masses in her stomach in June 2015. The couple moved into "hard-core research" to find the best doctor, Rory said. They found one at the University of Chicago, whom they nicknamed Dr. Serious. Surgery was scheduled within the week.

"He took her by the hand and said, 'For this to work well, you are the CEO of the hospital, you are not the CEO of your care. I'm your doc. You need to do what I tell you to do,' " Rory related.

The six months of chemotherapy that followed her surgery did not accomplish much. But an immunotherapy trial did.

The cancer was under control for three years, during which time the family traveled and Smith's faith deepened.

"She said that for her to handle what she as going through, she had to offload it onto somebody," Repicky said.

"We used to think that we could control everything, and then you find out for the big stuff, you're just along for the ride and you're trying to do whatever you can," he said.

Eventually, the therapy's side effects were too great. Joanne underwent another surgery in March 2020, right before COVID-19 shut everything down, and then another experimental trial last January.

It was "like pouring fertilizer on cells," Rory said.

Repicky said watching Joanne endure this experience has given him a lot more respect for the struggles her patients faced. It also has sharpened his focus.

"You appreciate the important things and you realize there is a whole lot of fluff, which shouldn't bother you," he said.

"You begin to realize what a quality life looks like," said Joanne's daughter Claire. "It changes the way you think about life."