Physical trainer flexes inspiration in fight of his life 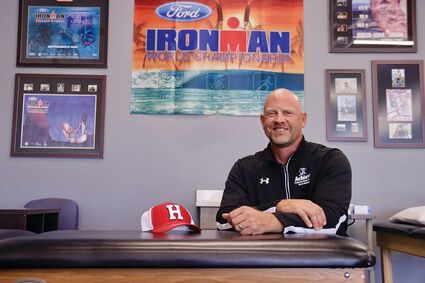 Building strength is Craig Kruse's stock in trade. The physical therapist has served several years as a Hinsdale Central football coach and a trainer for the school's student-athletes, helping them optimize their physical performance.

"It's fun to take kids full circle - to help them get bigger and stronger and faster in the weight room, help them become a better football player on the field, and if they get hurt, I'm able to help them get back (to playing) by treating them," said Kruse, who lives in Clarendon Hills and works at Achieve Orthopedic Rehab Institute in Willowbrook.

He has also come to know the body's susceptibility in a sudden, acutely personal way. At home July 19 following Red Devil football practice, Kruse's freshman son, Zach, heard a thud in his dad's office. Kruse had collapsed from a seizure and was rushed to the emergency room. A CT scan revealed a mass in his brain: grade IV glioblastoma.

Surgery to take a resection of the tumor was conducted July 22. Within a week Kruse was back in the weight room, coaching and providing PT to clients.

A football player and All-American shot putter in college, Kruse, 49, didn't even take a break from his national age-level throwing and weightlifting competitions.

"A month after surgery I competed out in Seattle in a masters-level track meet," Kruse related, underscoring a resolve to demonstrate resilience. "Showing the kids to keep moving forward is important. A lot of them came to see me in the hospital, and they were pretty excited when I was back in the weight room and back at practice."

"Now I'm on a maintenance chemo (regimen): one week on, three weeks off for the next six months," Kruse detailed. "I get a scan every two months."

The survival rate is 4 to 5 percent. Most patients live about 12 to 18 months after diagnosis.

"The unfortunate thing is, it will be back. It kind of is what it is," he remarked, before adding, "but somebody's got to be that 4 to 5 percent."

Kruse's new mantra is to live every day.

"It makes you want to be a better coach, be a better father, be a better physical therapist, be a better husband," he said. "I want to keep doing what I'm doing because I don't want to 'die' before I die."

Continuing athletic pursuits himself helps kids relate to him and clients trust him, Kruse commented.

"I think still being competitive with Olympic weightlifting and throwing the shot gives credence (to my counsel) that I walk the walk, and it's easier for them to believe you."

Never forget that prospering is the result of a process, he advised.

"Little gains all the time," he said. "It's not about being pain-free tomorrow."

He cherished a period last year when he and his son Ron were both coaching football and his wife Kristen was coaching lacrosse.

"So there were three 'Coach Kruses' at Central," Kruse said smiling.

So many reasons to smile, he suggested.

"Me knowing (death) will happen makes me appreciate every day more and living my dream."