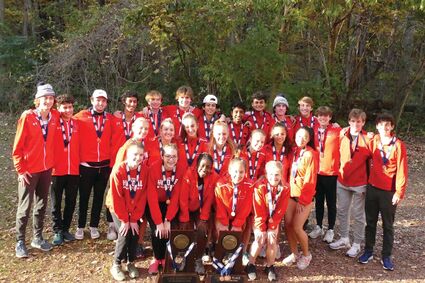 Hinsdale Central's boys and girls runners combined to collect a pair of plaques at Saturday's state cross country meet in Peoria. The boys were runner-up and the girls placed third, adding new chapters to both Red Devil programs' impressive legacies of success in the sport. "It was a great end to a great season," said senior girls team member Erin Milligan. (photo provided)

The Hinsdale Central boys and girls cross country teams each added hardware to their trophy cases last weekend with second- and third-place finishes, respectively, at the IHSA state final meet in Peoria on Saturday.

Both squads took advantage of the clear skies and unseasonably mild temperatures to register some of the best times of the season in the 3-mile race.

"The goal was that we wanted to (get a trophy) and we did just that," he said. "Our guys stepped up - that's what makes this team so special."

Senior Henry Gruber set a personal best time - by 40 seconds - with his 15:13.59, fourth on the team and 52nd overall. More importantly, he passed a couple of Downers North Trojans in the final stretch.

"It was pretty surreal," he said. "I felt that my form was pretty strong. Instinct overtook me, and I was just happy to run a good time."

Varsity boys head coach Jim Westphal said the team had been focused since August on ending the campaign on a high note. Having that vision materialize was pure delight.

"They were thrilled," he said of his team members. "Anytime you can trophy, you've got to seize the opportunity and feel good about it. The kids were super-excited that all the hard work and dedication paid off."

Illness on the team early last week had Westphal a little concerned.

"We had to adjust a few things and tweak things to make sure they were getting their rest and would be ready come Saturday," he said.

Revord said the group showed they were ready.

"We had guys filling gaps when other people were down and making it all about the team," said Revord, who also competed at state as a sophomore. "This (state meet) felt a lot different because our team was a lot better. Everyone had to play their part in order for us to get a trophy."

Gruber was inspired by message of encouragement from members of the 2014 state champion team.

"A lot of alums compiled a letter of some of their experiences at state and sent it to us. I thought that was pretty cool," he related.

Westphal after last year's state meet was canceled due to COVID-19, getting back to normal was gratifying.

"It just felt like it always has, so that was a nice opportunity for everyone," he said.

Revord, who's committed to run for the University of Missouri next year, said the celebration going home was memorable.

"The bus ride back was crazy," he said, relishing those last moments with teammates and coaches.

Gruber said the team's achievement didn't really sink in until he got home and took the race number off his jersey.

Central girls cross country underscored its status as one of the state's elite programs by placing third at state with 197 points. It was the school's eighth top-5 finish and fourth trophy in the last 15 years.

Junior Catie McCabe, competing in her first IHSA final with last year's cancellation, led the Devils with her time of 16:58.43 to earn 14th place and All-State honors. She said a top-10 position had seemed ambitious at the start the season, but the squad showed it was capable of loftier results as the schedule unfolded.

"Our team just sort of progressed," McCabe remarked, adding that strong performances at the regional and sectional meets were confidence boosters. "(The state race) was as good of a team race as we could have wanted."

Head coach Mark McCabe said the team's evolution over the last few months has been remarkable.

"This team, in all my years of coaching, is probably the team that's come the farthest from the start to finish," said Mark McCabe, Catie's father.

What they lacked in high-profile latent they made up for in commitment and composure, he stressed, pointing out that the team's top four runners recorded personal best times (see Page 43 for full results).

"On the biggest stage, if you run the race that got you there, you're going to do better than predicted because many don't do that," he said. "They stepped up for themselves and for their teammates, as well. It was top to bottom a really good performance."

Conference rival York won the title with 62 points, followed by runner-up Mt. Prospect with 151. The Devils were able to edge out fourth-place Minooka by seven points.

Senior Erin Milligan's career best time of 17:39.92 was the second fastest on the team, 42nd overall and a personal best.

"We weren't expecting that kind of finish, so it was exciting when it happened," said Milligan, also making her cross country state final debut. "Contributing to that third-place team win was awesome."

She admitted to being nervous going into the race but then realizing it was just like any other run.

"I felt very prepared from all the training and everything we've done," Milligan said. "It's the race we've been running all year long."

She said everyone was elated when they learned they'd held off Minooka.

"Our coach just told us when the results were official, and it was just the best moment ever," she said. "We were jumping up and down and hugging each other. I couldn't stop smiling."

Catie McCabe said the squad thrived on its selfless attitude.

"Forming that team bonding and closeness was an important factor for us to be successful," she said.

"You spend so much time together, and training is hard and it's stressful and you come out stronger together," she said. "(The state trophy) is more special than any other medal."