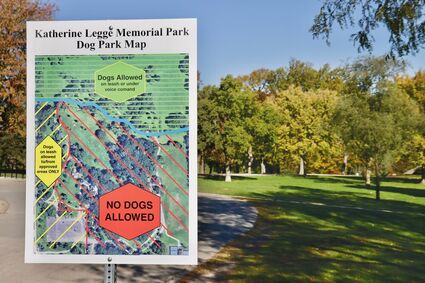 A sign posted at Katherine Legge Memorial Park shows the area where unleashed dogs are permitted during certain hours. A proposal to instead have a smaller enclosed dog park, paid for by builder Edward R. James, was rejected this week. (Jim Slonoff photo)

Dog-owning users of Katherine Legge Memorial Park persuaded Hinsdale officials not to shift them to a smaller facility in the park.

At Tuesday night's parks and recreation commission meeting, commissioners unanimously voted against recommending the creation of a 3.35-acre gated dog area, accessible from morning to night, at the 5901 S. County Line Road park. Dogs are currently free to roam 13.5 acres across the north end of the park during limited morning and evening hours.

Commissioner Steve Keane, alluding to the robust turnout of proposal opponents Tuesday and at the commission's Oct. 12 meeting, said the public will is clear.

"There's very little push to make the change," he said. "Ninety-nine percent of residents and nonresidents want to leave the status quo."

Opponents of the plan said the smaller enclosed dog area would detrimentally impact the special community that has formed among regular users and the diminish the experience for dogs and owners. Resident Darlene Bingham said dogs are not allowed in any other Hinsdale park, even leashed.

"There are just no dog-friendly parks in this beautiful town, other than KLM," she said.

In response to reports of unleashed dogs accosting people around the KLM parking lot, where dogs are required to be leashed, the dog owners say those isolated violations occur outside the designated hours by people not interested in being responsible users.

Heather Bereckis, superintendent of parks and recreation, acknowledged that "the majority of that activity" is happening outside the dog park hours. But she said she stopped four different people Monday morning outside The Lodge facility at the park for having dogs off leash while elderly people were arriving for a program.

Keane said cracking down on violations remains a subject for commissioners to study.

"I think our focus needs to be on how to get people to follow the rules and do it the right way," he said.

The fenced area concept emerged after the village and developer Edward James of KLM-adjacent Hinsdale Meadows determined that plans for James to level additional lacrosse fields at the park as stipulated under a 2016 development agreement was no longer a desirable community amenity. The dog park area was identified as an alternative.

Commissioner Hesther Hester said her initial interest in the proposal turned into opposition after hearing how cherished the unique large open dog run is by both residents and nonresidents.

"It really helped me to understand why that is such an asset to our village," Hester said,

She did express concern that a couple of dog bite incidents are reported each year and agreed with Keane that violations need to be addressed.

"We need very visible, very clear signage as to what the hours are and what is allowed," Hester said.

Resident Gail Tischke asked the village to consider putting an enclosed dog park at another park as an alternative amenity. Officials said that would need approval by Edward R. James and the village's attorney.

Commission Chairman Alice Waverley floated the idea to those in the audience of a self-policing "KLM Dog Park Association" to obviate the need for village police to respond to every leash scofflaw.

"It would be, I think, extremely helpful if you could serve as more of an enforcement body," Waverley said.

The commission is expected to begin discussing possible changes to the dog area hours, whether to require user registration and fees and sign upgrades in January.