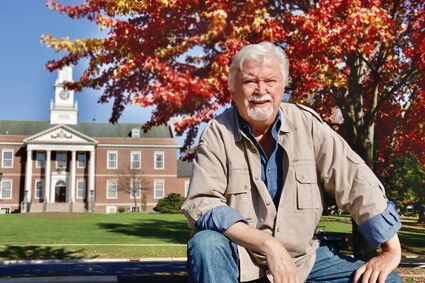 Immigrant, veteran, architect and author are just a few of the words that can be used to describe Hinsdale resident John Gachich. Another, Gachich said, is lucky.

"I was lucky beyond belief," said Gachich, recalling the time he spent fighting in Vietnam. Unlike so many other young men, Gachich lived not only to tell his story, but to write about it.

"One February Morning" is an account of the 14 months he spent there, much of which he seldom shared until December 2020, when he sat down to write his book.

"It's not gory," Gachich said. But it is a true account of his experience fighting for a country to which his own father fled when Gachich was just a boy.

Born in what is now known as Serbia, Gachich's father defected to the United States in the mid-1950s. Gachich and the rest of the family followed in 1959, settling in Flushing, New York. He was drafted to the U.S. Army in 1966 and spent his first two years of service stateside. Every morning included a check of the list of names, posted daily, of those who would be going to Vietnam. One morning in January 1968, Gachich's name appeared at the top of the list and his life changed forever.

Over the next year he would be fired upon nearly every day and experience things he could never forget.

Gachich said he did his best to protect his family by never sharing with them what he was actually doing in Vietnam. He let them believe he was driving a truck while he was actually firing weapons from a helicopter and having weapons fired at him every day.

During Gachich's time in Vietnam, his father, an electrical engineer, took a job building Fermi-Lab. Upon his return to the United States, Gachich settled near his parents and earned a degree in architecture from University of Illinois at Chicago Circle.

Among other things, Gachich used his architectural skills to design homes that could fit on Chicago's narrow lots. That experience led him to Hinsdale, where he designed about a dozen homes near the Hinsdale Hospital, making full use of their limited space. After living in several homes throughout Hinsdale, Gachich recently settled into an apartment just a couple of doors down from his favorite breakfast spot, Page's.

"I eat breakfast there just about every morning," he said.

While "One February Morning" is a true account from Gachich's life, he leaves it up to the reader to decide whether his first book, "Creation 1954," is fiction or nonfiction. "Creation 1954" is the story of a Vietnam veteran who, after years of fervent, largely unanswered prayers, finds himself face to face with God and the opportunity to ask all of his unanswered questions. The book prompts the reader to consider the question, "What would you ask God if you had the chance?"

"There are definitely parts of me in that book," he said.

Gachich said both of his books were inspired by events in his life - one by his time in Vietnam and the other by time spent stargazing at his grandmother's house outside Belgrade, wondering about God, religion, which came first and what comes next.