'Beautiful soul' had an inclusive spirit 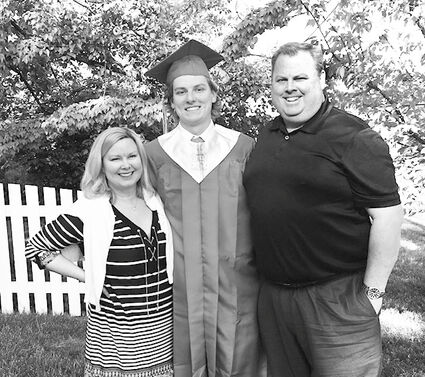 Although he was hard to miss with his shock of well-coiffed red hair, Chris Chute tried to keep his emotions in check behind a mild-mannered demeanor. "He never wanted to create a scene, He couldn't stand it when there was drama," his mom said. "Everybody just liked him." (photo provided)

Hinsdale's Chris Chute never wanted anyone to feel left out.

His mom, Kirsten, said Chris' gentle, big-hearted nature was a common refrain at the memorial service following his Aug. 31 death at age 23.

Then last week, she received a letter from a former Monroe School classmate recounting her son's kindness when she was the new kid in fourth grade.

"She wrote, 'Nobody was talking to me, and (Chris) was the very first person to start up a conversation about basketball,' " Kirsten relayed. "He just always was trying to make people feel better."

His older sister Haley speculated that Chris' late developing speech as a child imbued him with a penchant for deep thought "and also his great ability to really listen and genuinely care.

"Chris had a beautiful soul - consistently genuine and calm but also passionate and fierce. He was truly authentic, and this authenticity is what made him so personable. Everyone flocked to Chris and wanted to hear what he had to say," Haley added.

"He was always up to do anything for and with his friends. He loved sharing his passions with everyone else in such an amazing way," said Hagen, remarking at Chris' infectious laugh and his razor-sharp intellect.

"Chris was able to take the most awkward of situations and have everyone laughing by the end," Abby said.

She fondly recalled hours spent sitting in their basement playing video games together - not something many older brothers would accommodate,

"He would always let me sit and hang out with him, a tradition of ours that continued for years," she said.

Chris played lacrosse at Central, loved music and developed an abiding fascination with "The Lord of the Rings" trilogy. His insatiable quest for knowledge led him to follow Haley's path to DePauw University, graduating with a degree in philosophy in 2020.

Experiences like pledging Alpha Tau Omega fraternity and spending a semester in Amsterdam helped Chris blossom academically and socially, Kirsten said. The byproduct was evident at the memorial.

"There must have been 100-plus, probably more, kids from DePauw. They just showed up in droves and dominated the whole left side of the church," she said.

Last summer, Chris joined Haley in Denver, where he had landed a job with an investment firm. Earlier this year he transitioned to a pizza catering company. Haley said Chris endeavored to adhere to a moral ethos.

"He tried to live by the stoics four core virtues: justice, temperance, wisdom and courage," she said.

Chris' also lived with mental health struggles, according to Kirsten.

"He did have anxiety and depression," she acknowledged. "We tried absolutely everything to get him help."

Chris died in Denver after a fall from a building's 13th-floor balcony.

Hinsdale Central classmate and friend Shane Anderson said Chute embraced "the natural essence of life ­- to absorb and appreciate the many gifts that the world offers us."

Hagen said he will remember Chute's ever-present smile and his easygoing way. To honor his memory he helped organize a dinner and slideshow of photos and videos of Chris.

"Eventually, I and some others will be going to Amsterdam and the location of where the Shire from 'Lord of the Rings' was filmed in New Zealand," Hagen said,

Haley intends to join friends to see the new film "Dune," another one of her brother's favorite epic sagas.

" 'Fear is the mind-killer' is the quote from 'Dune" we would say to one another and smile when we talked of facing challenges throughout our lives," she said. "Chris's mantra was to live fearlessly and courageously."

"He had this knack for making hilarious facial expressions when speaking, which he got from our dad (Tom)," Haley added.

She shared an episode last Halloween when she and Chris were rollerblading at a Halloween party.

"He led a train of 30 people across the rink dressed as Ron Weasley, raising his wand and smiling as we all followed behind," she said. "His energy gathered people around him, and that was one of those times where it really showed."

Abby, a college freshman, said she has learned to cherish every moment, whether laboring over her studies or cavorting with friends. 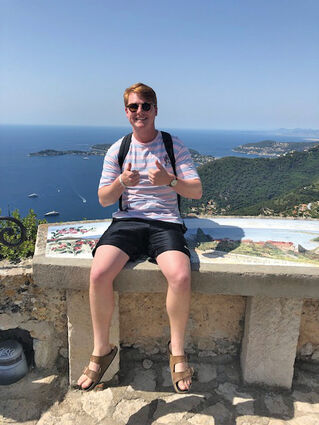 "One of the last things Chris said to me was how proud he was of me and how excited he was for me to finally have the college experience that he cherished so deeply," she said.

Kirsten flashed back an to episode from Chris' freshman year after he received a failing grade on an art history test. He approached the professor for some direction, and by the end of the course had earned an "A." When the professor was later doing post-doctorate work at Yale University, he cited Chris in his thesis as portrait in perseverance.

"He wrote something like, 'You showed me how a dedicated student can respond to my teaching and has abilities beyond my wildest dreams'," she said.

Haley aims to honor her brother and best friend by reaching for her dreams.

"He'd want me to live with a lot of love and be my truest self."